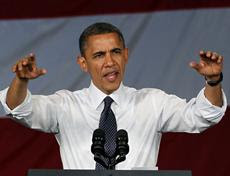 The film spotlights that decision, as well as Obama efforts on such gay and lesbian issues as hospital visitations, spousal benefits, federal appointments, and statutes against hate crimes.

If re-elected, Obama pledges to be a "strong advocate" to "preserve the gains that we've made over the last three years," and to expand gay rights in such areas as adoptions and lifting travel bans.

The campaign describes it as "a way for LGBT people and allies to step up in this election and make sure President Obama gets a second term."

Among the targets of Obama Pride: Pennsylvania, Colorado, Nevada and Michigan.