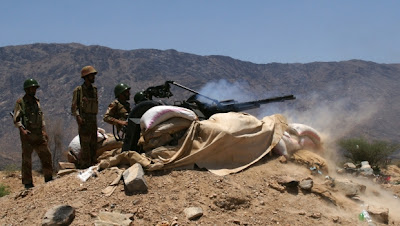 KABUL, Afghanistan (AP) – France's new president said on Friday that his country's troops had carried out their mission in Afghanistan and that it was time for them to leave, an early pullout that will be coordinated with the United States and other allies
Francois Hollande arrived early that day in Afghanistan to meet with troops and Afghan President Hamid Karzai to discuss plans to pull out 3,300 troops more than a year earlier than scheduled. His visit was not announced ahead of time for security reasons.

"Several reasons justify this decision to withdraw our combat troops from Afghanistan," Hollande told French troops at a base in the Nijrab district of eastern Kapisa province. "The time for Afghan sovereignty has come."

He also added that "the terrorist threat that targeted our territory, while it hasn't totally disappeared, is in part lessened." Another reason "is that, simply, you have carried out your mission."

"Thank you for what you have accomplished for France, what you are doing for Afghanistan," Hollande told the troops before flying to Kabul to meet Karzai.

Hollande announced plans at a NATO summit this week to pull out French troops by the end of the year, well ahead of the alliance's 2014 withdrawal date.

Amid increasing French disillusionment with the war, Hollande's conservative predecessor Nicolas Sarkozy had pledged to withdraw all troops by the end of 2013. Hollande, elected president earlier this month, made a more immediate pullout a pillar of his campaign.

Tension over Hollande's pledge to end his country's combat mission two years early dominated the NATO summit in Chicago, and unleashed fears of a domino effect of other allies withdrawing early. Hollande has suggested noncombat troops may remain beyond Dec. 31.

Although the departure of French troops should not affect the campaign against the insurgency, there are fears it could cause some allies to accelerate their withdrawal.

The coalition has already started handing over security control to Afghan army and police in areas home to 75 percent of the population with a goal of putting them in the lead for all the country by mid-2013. NATO and other foreign forces would then be in a support role for the 352,000-strong Afghan National Security Forces.

Most foreign combat troops will have left Afghanistan by the end of 2014, when Afghanistan will take complete control for security around the country.

Kapisa, where Franch forces are based, is one of the areas already being transferred to Afghan control. Ashraf Ghani, head of a commission overseeing the transition, said earlier this month that "the risks in Kapisa are containable and within our capability."

Despite assurances from the Afghan government and the U.S.-led coalition that the situation in Afghanistan has been improving, violence persists around the country.

Afghan officials said that three explosions in three cities of southern Afghanistan on Friday killed three and wounded at least nine others.

Fareed Ayal, a spokesman for the police in Uruzgan province, said a police vehicle hit a roadside mine in Chora district, killing one police inspector and wounding two other policeman.

Daud Ahmadi, a spokesman in Helmand province, said a roadside bomb struck a bus the same day in Gereskh district. Two civilians died and four others were injured. He says the bomb was planted near a NATO supply site in an apparent attempt to target foreign troops.

In Kandahar province, police chief Gen. Abdul Razaq said a suicide bomber on a motorcycle blew himself up in Spin Boldak district, wounding one border policeman and two civilians.