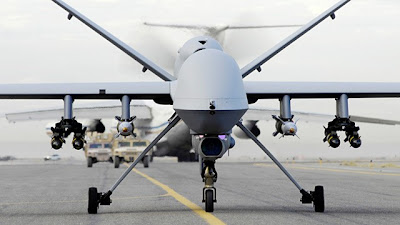 President Obama is running for a second term as a commander-in-chief who has ended one war and is bringing another swiftly to a close. Left unmentioned, however, is the war he's quietly escalating with an army of aerial drones.

The largely clandestine effort, profiled in a New York Times report and a forthcoming book by Newsweek's Daniel Klaidman, highlights a remarkable transformation for a man who campaigned four years ago as an anti-war Senator, former law professor and defender of Constitutional due process. He pushed for an end to the use of torture on terror suspects, the closure of the Guantanamo Bay military prison, and for trying detainees in federal courts. For those efforts he won the Nobel Peace Prize.

Yet over the past three and a half years, Obama has sat quietly "at the helm of a top secret 'nominations' process to designate terrorists for kill or capture, of which the capture part has become largely theoretical," according to the Times. He personally vetted names on a "kill list" of targets, authorizing dozens of drone strikes even in cases with only vague and inconclusive evidence about who's really on the ground, according to the report. Neither the evidence against the suspects nor the suspects' identities is available for public scrutiny.

The mission, described as highly nuanced and complex, reportedly weighs heavily on Obama, who has grappled with the moral and legal implications of making a decision to kill. "He would squirm. He didn't like the idea of 'kill 'em and sort it out later,'" one source close to Obama told Klaidman.

But the president ultimately appears to have reconciled his principles with a form of pragmatism in fighting what is an unconventional war. He often "approves lethal action without hand-wringing," the Times writes.

Since January 2009, the U.S. has launched at least 281 drone strikes in Pakistan alone, according to the New America Foundation, which has tracked them based on news reports and other sources. During the last five years of George W. Bush's presidency -- 2004-2008 -- the group counted just 49. The government has not put out its own totals, which are also said to include strikes in Yemen and Somalia, other known havens for suspected terrorists.

As a result of the calls Obama has made, hundreds of militants are now dead. But there have also been civilian casualties, cases which have enflamed relations between the U.S. and the targeted countries.

While exact numbers are difficult to confirm, NAF estimates at least 1299 militants have been killed in drone strikes since 2009. At least 153 civilians were also reported victims, with some estimates ranging far higher.

White House counterterrorism advisor John Brennan said last month -- for the first time publicly confirming the existence of the drone operations -- that the strikes have "surgical precision" and that civilian casualties are "exceedingly rare."

"In full accordance with the law -- and in order to prevent terrorist attacks on the United States and to save American lives -- the United States government conducts targeted strikes against specific al-Qaeda terrorists, sometimes using remotely piloted aircraft, often referred to publicly as drones," he said in speech at the Woodrow Wilson Center in D.C.