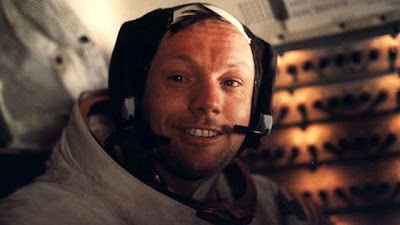 Neil Armstrong, the first man to walk on the moon 43 years ago, has tried to live a private life since Apollo 11 came back to Earth, but he did agree to give a rare interview -- to the head of an Australian accounting group.

In an hour-long conversation with Alex Malley of CPA Australia, Armstrong retold the story of his life as an astronaut, culminating in the 1969 landing, with his crewmate Buzz Aldrin, on the lunar plain they called Tranquility Base.

"I should say I thought we had a 90 percent chance of getting back to Earth on that flight," Armstrong said in this rare interview, "but only a 50-50 chance of making a successful landing on the first attempt."

The landing was so complicated, and their lunar landing ship Eagle so low on fuel that Armstrong touched down less than 30 seconds before Mission Control would have told them to give up and try to come home. Eagle's computer, overloaded with data as it tried to steer the ship to the surface, was trying to put them down in a crater full of boulders.

"Those slopes are steep, the rocks are very large -- the size of automobiles," he said. He took over manual control, skittering over the lunar surface in search of a safe place to land.

"There's so many unknowns in that descending from lunar orbit down to the surface that hadn't been demonstrated by testing," Armstrong said in the interview, "and there was a big chance that we didn't understand something in there properly, and we had to abort and come back to Earth without landing."

Armstrong, now 81, has spent the years since Apollo 11 as an engineering professor, a member of corporate boards and an occasional public advocate for continued space exploration. He said he thought it a pity that the Obama administration and Congress today disagreed on America's future in space, with NASA caught as a "shuttlecock" between them.

"NASA has been one of the most successful public investments in motivating students to do well and achieve all they can achieve," said Armstrong. "It's sad that we are turning the program in a direction where it will reduce the amount of motivation and stimulation it provides to young people. And that's a major concern to me."

In the interview Armstrong is characteristically soft-spoken, choosing his words slowly, often fending off questions by repeating things he said in the years after his return from the moon. Has made occasional public appearances in recent years to testify before Congress or mark major anniversaries of the space effort. He has declined most other requests for interviews, and stopped giving autographs when people sold them for thousands of dollars.

So why did he agree to talk to a CPA? Malley, quoted by Australian media, said, "I know something not a lot of people know about Neil Armstrong -- his dad was an auditor."

Armstrong was asked about the rumors over the years that the moon landings were faked, and he chuckled. "It was never a concern to me because I know that one day, somebody's going to go fly back up there and pick up the camera that I left."