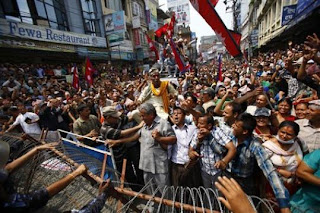 The country's parliament, elected in 2008 to write the statute after a decade of civil war, will be disbanded ahead of November elections after failing to agree on the nation's new federal structure. 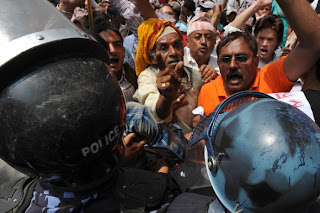 "Though we were unable to promulgate the constitution, we have decided to seek a mandate through elections for a new Constituent Assembly on November 22," Maoist Premier Baburam Bhattarai said in a televised address.

Bhattarai, who leads a national unity government made up of the country's four major parties, vowed to stay in office until the vote, saying executive power would remain with his government.

The debate over the ethnic identity of states has sparked violent protests in recent weeks.

On Sunday, ethnic groups staged demonstrations near the parliament building as the assembly of politicians argued inside.

A police spokesman told that more than a dozen people had been injured after protesters tried to break a security cordon outside parliament, prompting the police to baton charge the demonstrators and fire teargas.