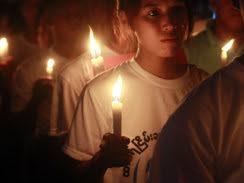 Protests in Myanmar over persistent power shortages are providing a test of how the country's elected but military-backed government will respond to rising expectations sparked by democratic reforms.

Small demonstrations in the country's two largest cities and several towns this past week could be seen as an indicator of the new openness under President Thein Sein.

From another point of view, the protests — peaceful and limited in size and scope so far — serve as a reminder of the early stages of past unrest, small affairs sparked by complaints over the economy that snowballed into large-scale challenges to authority.

In 2007, the former military regime used armed force to put down the so-called Saffron Revolution, which began as small, localized protests over fuel price hikes.