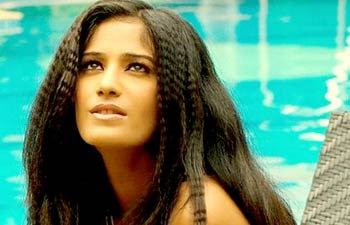 All for the love of the game! Internet sensation Poonam Pandey recently posted a nude pic of hers on Twitter after Shah Rukh Khan's KKR beat Chennai Super Kings to win IPL season 5.

Poonam Pandey has now made another promise that her next act will be hotter than ever before. She took to Twitter to thank all her fans, and added "Thanx for having trust and patience towards me ... i Promise the next Show is gonna get Hot, Hotter and Hottest luv u all xox."

The Mumbai girl had been desperate to pose nude for long on just about any issue that has hit the headline. She first pulled off a grand hoax saying she would strip if India lifted the cricket World Cup last year. India won, but she didn't strip, and no one really cared. Since then, she has been crying out from the rooftops about plans to pose in the nude over several issues. But it never materialised.

But KKR's recent victory had finally made Poonam drop the last thread off her frame.

She tweeted, "Thanx a million Tweethearts and fans round the world for loving me so much.... luv u all... Stay tune my Debut Film has lot more for u(sic)."

Besides, the bombshell took the world by storm and started trending in India as well as worldwide on Twitter. She wrote: "Wow i am trending World Wide...".

Poonam, who was earlier making headlines for stripping in an MMS clip, said that she kept 50 per cent of her promise to bare-all by donning a bikini in the footage. She also revealed that she is quite at ease whenever she is required to wear a bikini for her photo shoots.

Poonam was one of the Top 8 contestants of Gladrags 2010. She also appeared on the reality show Khatron Ke Khiladi season 4, hosted by Akshay Kumar.