Schumacher wins Monaco qualifying but misses out on pole 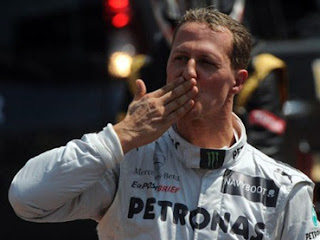 Five-place penalty won’t allow F1 legend, Michael Schumacher, top the grid at the start of the Monaco Grand Prix, despite being the fastest in qualifying.

Schumacher’s result of 1 minute 14.301 seconds was unreachable for his rivals in the third segment of the qualifying session on Saturday.
But the seven-time champion won’t be able to celebrate his first pole position after his Formula 1 comeback this time.

The 43-year-old was punished by the stewards for crashing into Bruno Senna of Williams at the previous race in Barcelona and will begin the race from fifth spot. 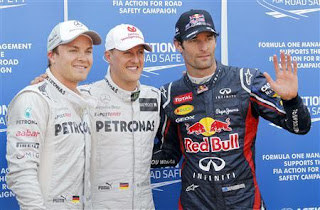 If not for the penalty it would’ve been his 69th career pole for the German.The first spot on the grid went to Mark Webber of Red Bull, who clocked the second best time.The Aussie driver will be accompanied by Schumi’s Mercedes partner, Nico Rosberg, on the front row.

The drivers, who are tied for championship lead, Ferrari’s Fernado Alonso and Sebastian Vetter of Red Bull will occupy 6th and 10th starting position, respectively.