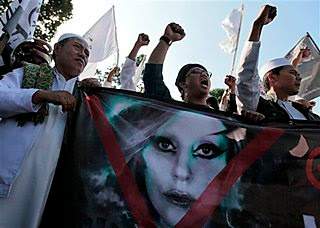 The controversy was a blow to the predominantly Muslim country's reputation for combining free speech and democracy with a mostly moderate brand of the faith.

Fans were devastated, despite the promoter's offer of full refunds. Some accused police — who refused to issue a permit over concerns about security — of buckling to the will of a small group of thugs.

The planned "Born This Way Ball" concert has been on-again-off-again from the start.

But on Sunday, it was final, said Minola Sebayang, a lawyer for Big Daddy, the promoter of the June 3 show.

"It's unfortunate," he said. "But with threats if the concert goes ahead, Lady Gaga's side is calling it off. This is not only about Lady Gaga's security, but extends to those who will be watching her."

Indonesia, a secular nation of 240 million, is often held up by the U.S. and others an example of how democracy and Islam and can coexist. In many ways they are right. Since emerging from dictatorship just over a decade ago, sweeping reforms have resulted in direct elections, while vastly improving human rights and freeing up the media.
But a small extremist fringe has become more vocal — and violent — in recent years, attacking Christians and members of other religious minorities, transvestites, atheists and anyone else deemed "immoral."

The most notorious group, Islamic Defenders Front, called Lady Gaga a "messenger of the devil" and vowed to turn out at the airport by the thousands if she tried to step off the plane. Others said they bought tickets so they could wreak havoc from inside the 52,000-seat stadium in the capital, Jakarta.

Police responded by denying the necessary permits. Then, after public outcry, they said they'd reconsider — but only if Lady Gaga agreed to tone down her act.

Instead, she pulled the plug on what was supposed to be the biggest stop on her Asian tour.

But that provided little consolation to people like 25-year-old Johnny Purba.

"This only shows to the world how weak security forces are in this country, how police are afraid of a bunch of hard-liners," he said.

"Gaga's two-hour show will not hurt Indonesian Muslims. For God's sake, she is not a terrorist!"

Around 50 others, dressed up like the pop diva, performed a mob flash dance at a shopping mall in the capital, Jakarta, to some of her biggest hits.

Hard-liners, however, were ecstatic.

"This is a victory for Indonesian Muslims," said Salim Alatas, one of the leaders of the Islamic Defenders Front, or FPI. "Thanks to God for protecting us from a kind of devil."

Earlier, Murhali Barda, a spokesman for the group, said supporters had purchased more than 150 tickets to the concert.

He'd posted a picture on his Facebook page of a man hiding his identity with a turban and sunglasses and holding a $50 ticket to the "Ball."

"We have gotten Lady Gaga tickets," the caption said. "Not to watch but for us to enter."

"Our target is to stop the concert," he wrote, providing little more detail. "We would force them off the stage but not harm the audience."