Bankia group risks dragging the rest of Spain into its vortex 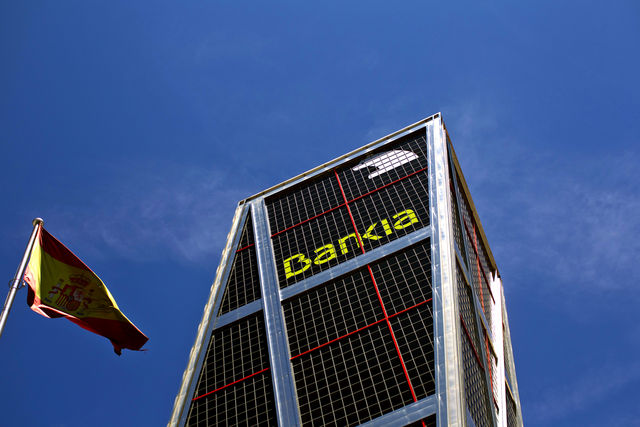 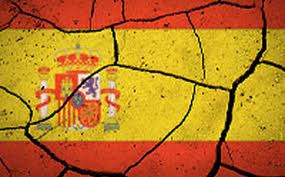 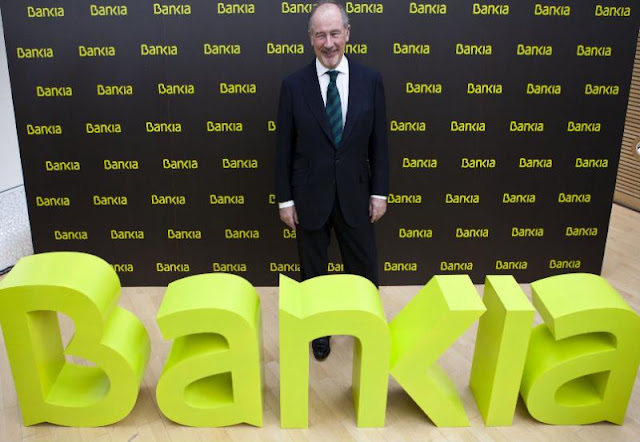 As Spain’s third-biggest bank asks Prime Minister Mariano Rajoy’s government for 19 billion euros ($24 billion), international investors are tallying the potential cost for the rest of the industry and betting he won’t be able to foot the bill. With foreign investors shunning Spanish debt, leaving national banks to fund the government, the nation’s 10-year borrowing costs compared with Germany’s are near a record.

“The problem for Spain is that they can’t simply finance all this by issuing debt,” said Edward Thomas, who helps manage $6 billion as head of fixed income investment at Quantum Global Wealth Management in Zug, Switzerland. “It’s a perfect storm for Spain, with more banks now being sucked in.”

Spain needs to bail out lenders still reeling from the collapse of the real-estate boom while its own access to funding increasingly depends on domestic banks being kept afloat by the European Central Bank’s refinancing operations. Rising borrowing costs are putting pressure on Rajoy’s five month-old government to join Greece, Portugal and Ireland in seeking a rescue that would be the European Union’s biggest.

The yield on Spain’s 10-year government bond climbed 21 basis point to 6.63 percent yesterday, close to the euro-era record of 6.78 percent hit on Nov. 17. By contrast, the yield on Germany’s two-year bond fell to zero as investors forgo a return in exchange for safety amid Europe’s escalating crisis.
Credibility Problem

Spain is facing a credibility problem because of doubts generated by Bankia about “the size of that hole in the banking system,” said Andrew Bosomworth, a money manager at Pacific Investment Management Co., in a Bloomberg Television interview on May 29.

“They know what to do. I think it’s the consequences of doing it -- how do the markets react if Spain applies for official external finance,” said Bosomworth, adding that experience of bailouts for Greece, Ireland and Portugal had been like a “kiss of death.”

An EU and International Monetary Fund rescue for Spain that covered the government’s gross funding needs through the end of 2014 and included 75 billion euros to recapitalize banks could amount to about 350 billion euros, David Mackie, chief economist at JPMorgan Chase & Co. in London, wrote in a report on May 30.

It’s not clear whether Spain would be able to seek a bailout just for its banks. While the European Commission yesterday backed Spain’s view that euro’s permanent rescue fund should be able to sidestep governments and recapitalize banks directly, Germany continues to oppose the idea.

Views vary on how long Spain, which is twice the combined size of Greece, Portugal and Ireland, can hold out. The Treasury faces its heaviest bond redemptions for the year in October, when 20 billion euros of debt comes due. External auditors are due to publish a stress test on Spanish banks in June, followed by a more detailed report that will make clear how much additional capital banks may need.

“We have to wait for the outcome of the independent audit and that could certainly be another trigger,” Tobias Blattner, a European economist at Daiwa Capital Markets in London, said in a telephone interview.
Taxpayers’ Money

Some investors aren’t waiting for those reports and instead are using Bankia as a benchmark for the rest of the industry, ignoring Economy Minister Luis de Guindos’s view that Bankia is a “specific” case.

Jose Ignacio Goirigolzarri, the former second-in-command at Banco Bilbao Vizcaya Argentaria SA (BBVA) brought in to run Bankia, went beyond the requirements of de Guindos’s two banking decrees in his cleanup of the group, setting aside provisions for residential mortgages and loans to companies outside the real- estate industry.

If that became the benchmark, lenders including CaixaBank (CABK) SA and Banco Popular Espanol SA (POP) may not be able to cover the shortfall from the profit they generate, Santiago Lopez, an analyst at Exane BNP Paribas, said in report on May 29. That may mean another 45 billion euros of taxpayers’ funds may be needed for the industry, he said.

“Everyone will do their numbers based off Bankia, but what these guys are trying to do is put the bank on a good footing to make money going forward,” said Inigo Lecubarri, who helps manage about $300 million at London-based Abaco Financials Fund, adding that other banks in Spain aren’t in Bankia’s position.
International Investors Flee

Goirigolzarri’s numbers also undermined the government’s credibility as his 19 billion-euro bailout request came two weeks after de Guindos had said 15 billion euros would be enough for the whole industry to meet his latest decree on bank rules.

Foreign investors are responding by selling Spanish bonds. They held 37 percent of the total in April, down from 50 percent at the end of last year, while Spanish banks increased their holdings to 29 percent from 17 percent, Treasury data show.

Even as Rajoy repeated on May 28 that Spanish banks won’t need a European bailout, bond yields continue to move toward the 7 percent level that tipped Greece, Portugal and Ireland into rescue programs. Yields have risen 70 basis points since Bankia was nationalized. A basis point is equivalent to a hundredth of a percentage point.

“I was always worried that there was a risk that Bankia could become a sort of vortex,” said Luis Garicano, a professor at the London School of Economics in a phone interview. “I hope that can be avoided.”