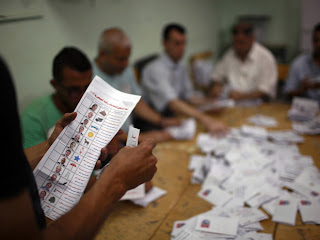 The Muslim Brotherhood said on Friday its candidate was leading the early count in Egypt's first free presidential election that exposed a rift in the nation between supporters of Islamists and backers of men who served deposed autocrat Hosni Mubarak.

The divisive showdown dismayed many Egyptians who fear either one means an end to any democratic gains produced by last year's uprising.


More than a year after protesters demanding democracy toppled Mubarak, the face-off between the Brotherhood's Mohammed Morsi and former air force chief and prime minister Ahmed Shafiq looked like a throwback to the days of his regime – a rivalry between a military-rooted strongman promising a firm hand to ensure stability and Islamists vowing to implement religious law.