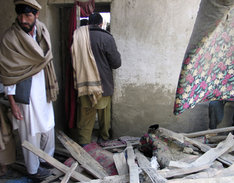 A coalition air strike has killed at least seven members of an Afghan family in eastern Afghanistan, local officials report. NATO has acknowledged the allegations and is conducting an investigation into the incident.
A spokesperson from the province of Paktia said the attack struck at around 8:00 pm on Saturday in the village of Suri Khail.
"The bombardment by ISAF killed the six children and wife of a man named Shafee," local official Rohullah Samon told Reuters news agency. He added that the strike was not coordinated with Afghan forces stationed in the area.
Civilian casualties caught in the crossfire in Afghanistan are a serious bone of contention between the country’s government and allied forces. The US-led coalition has pledged to withdraw from Afghanistan by 2014 and is gradually handing over security responsibilities to the Afghans.