Though it was a given for Internet surfers to use Microsoft’s Internet Explorer in the past, things are changing rapidly as Google’s Chrome is seeing a fast rise worldwide, including in Korea.According to Stat Counter, a Web tracking company, Internet Explorer was atop the list of global Web browser usagee with 45.17 percent in April. Firefox was second with 29.8 percent, and Google’s Chrome had a mere 17.57 percent.

But within a year, things have drastically changed. Chrome is the choice of 31.41 percent of world users as of last month, just behind Internet Explorer on 34.18 percent.In Korea, though Internet Explorer is still overwhelming other top browsers such as Firefox, Safari and Maxthon, Chrome is beginning to emerge as a possible contender. In April 2011, 91.93 percent of Korean users used Internet Explorer, while only 4.33 percent used Chrome. Some had never even heard of others browsers used overseas.In April this year, Chrome accounted for 13.88 percent of domestic users, the only browser to reach the double digits to challenge Internet Explorer’s 78 percent.

According to Kim Kee-chang, a law professor at Korea University who specializes in Internet security, the overwhelming dominance of Internet Explorer is due to a law requiring all online transactions to be done through Active X. As Internet Explorer is the only browser supporting Active X, the professor asserts that other choices have been kept down unreasonably and unethically.“Using authorized certificates has a misplaced reputation as allowing safer online transactions of information,” Kim told The Korea Times over the phone. “It is a groundless belief, instigated by online security firms and the Financial Security Services (FSS).”Woori Bank recently changed its policy to stop employing Active X, and started open banking. Online shopping sites G Market and 11st are also implementing an open browser policy to allow Internet purchases without requiring the installation of Active X. The changes are due to rising complaints about the security program that requires a tiresome installing of programs that stall procedures.

“It is not just about the bothersome process of installing Active X that poses a problem. The fact is that the security program offers no real security. It is outdated, with creator Microsoft even considering scrapping it. It announced that they will not support it in future versions of Internet Explorer,” said Kim.Microsoft has announced that while it supports Active X for Internet Explorer 6 and 7, the upcoming Internet Explorer 8 and 9 will not support the service.he comments of the professor are reflected in the general mood of people in Korea, one of the most plugged-in countries in the world.“I use Chrome a lot because it is fast and very accessible,” said an office worker in Korea. “Along with the wider recognition of Google, I think more and more people around me are leaning towards Chrome.”Another downside of Internet Explorer, besides the need to agree to an authorized certificate for monetary transactions is the need to install toolbars. To access popular Web portals such as Naver or Daum, users are required to install provided toolbars, which are now considered cumbersome by those who have other new options open to them.

Chrome has the advantage of not needing tool bars, unlike Internet Explorer and Firefox, among others.The office worker, aware of the legal requirements of authorized certificate, believes that as a consumer, there should be more competition between Web browsers.“I think the only way consumers like me can feel secure is to actually have an atmosphere where a diverse selection of Web browsers are available to us.”

"It's great to see more and more people around the world experiencing the speed, simplicity and security of Chrome,” Google said in a statement following the release of Stat Counter’s data. “We remain focused on building a better browsing experience so that people can enjoy a better Web." “Web browsers such as Chrome deserve a better atmosphere for competition. Recent releases (like Chrome) are safer and more comfortable to use,” according to Kim. 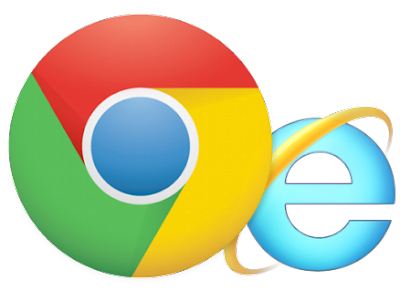