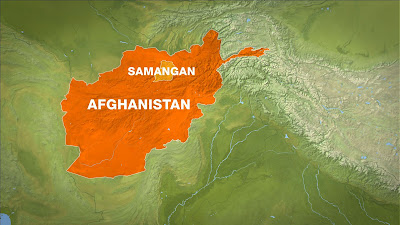 A Taliban bomb attack has destroyed 22 fuel tankers carrying supplies for NATO forces in Afghanistan, local officials said, as nine Afghan soldiers and two NATO troops died in escalating attacks.
A magnetic bomb stuck to the side of a truck triggered a series of powerful explosions in what were mainly fuel tankers parked overnight at a rest stop in Samangan in northern Afghanistan on Wednesday, officials said.
The pre-dawn fire engulfed the trucks, which were on their way from Uzbekistan towards NATO forces in the south, said Ghulam Sakhi Baghlani, Samangan deputy governor.
"The first explosion resulted in a fire which quickly engulfed as many 22 trucks," he said, adding that three drivers were also injured in the blaze.
NATO was forced to make greater use of more expensive northern supply routes after Pakistan banned its convoys following a botched US air strike which killed 24 Pakistani soldiers last November.
Taliban members fighting to overthrow the Western-backed government of President Hamid Karzai claimed responsibility for the tanker attack, saying several private guards were killed.
A spokesman for NATO's International Security Assistance Force (ISAF) said initial reports showed 24 tankers were destroyed after an improvised bomb attack.
But he said he could not immediately confirm that the civilian tankers were carrying fuel for ISAF, which relies on contractors to move many of its supplies.
Pakistan lifted its blockade on NATO supplies earlier this month, but only a few trucks have actually crossed the border.
Owners say they are waiting for compensation and security guarantees in the face of Taliban threats before resuming journeys from the Arabian Sea port of Karachi to the Afghan border.
More attacks
Brigadier General Gunter Katz, an ISAF spokesman, said this week that there had been an increase in attacks in Afghanistan recently.
"Generally, in the past 12 weeks, we have a slight increase, 10 per cent, of insurgent attacks on Afghan security forces and international troops," he told a news conference.
In southern Afghanistan, nine Afghan soldiers were killed in an attack by Taliban fighters on an army post, officials said on Wednesday.
Fighters armed with heavy machine guns and rocket-propelled-grenades stormed the army post in Washir district of Helmand province late on Tuesday, sparking a fierce firefight lasting more than an hour, they said.
"Unfortunately nine ANA [Afghan National Army] soldiers were killed and seven others injured in the fighting," provincial spokesman Daud Ahmadi told the AFP news agency. Seven Taliban members were also killed in fighting.
The Taliban, toppled in late 2001 in a US-led invasion, are waging an insurgency against the government and US-led forces, who have some 130,000 troops in the impoverished and war-ravaged country.
But the international coalition will withdraw by the end of 2014, and Afghan forces, who are being trained to take over responsibility for security, are increasingly coming under attack.
Troops with the US-led coalition continue to take casualties however, with two NATO soldiers killed in an improvised bomb attack in eastern Afghanistan on Wednesday, ISAF said in a statement.
Their deaths take the total toll for the coalition this year to at least 242, according to a tally by the icasualties.org website.
Two others were injured in a helicopter crash in western Afghanistan. The cause of the incident was under investigation, the coalition said.