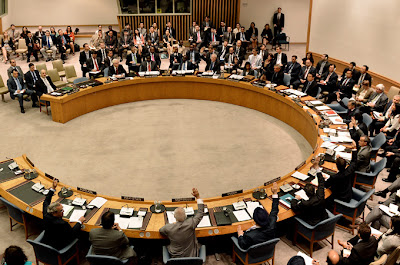 The Security Council has unanimously voted to extend the UN monitoring mission in Syria for a further 30 days, a day after a resolution that sought to impose sanctions on President Bashar al-Assad's regime was vetoed by China and Russia.
The council envoys had debated competing resolutions aimed at extending the mission in Syria on Friday, with Russia threatening to veto a British proposal on the extension while a rival measure by Pakistan lacked clear support.
The UN mission, known by its acronym UNSMIS, was deployed as part of UN-Arab League envoy Kofi Annan's peace plan to end the 16-month conflict that has killed thousands.
Its mandate was to expire at midnight on Friday (0400 GMT on Saturday).
The resolution is a lifeline for the unarmed observers who were sent to Syria three months ago to monitor a cease-fire that never materialized.
The unarmed 300 observers, commanded by Norwegian Major-General Robert Mood, are also tasked with watching over the implementation of Annan's six-point peace plan, flouted by al-Assad's government.
The council voted shortly after Russia's ambassador to France, Alexander Orlov, said he believed Assad was ready to step down "in a civilized way".
The Syrian government immediately denied it, and the Russian foreign ministry said the ambassador's statements were taken out of context and "wrongly interpreted".
Al Jazeera's Alan Fisher, reporting from the UN headquarters in New York, said: "The Americans have suggested that the extention is really only to allow an orderly withdrawal of the mission from Syria."
He said the resolution calls for a report from the UN secretary-general in 15 and then again in 30 days.
"The UN Secuirty Council will then assess the situation on the ground, and it's clear if things have not improved, the intetion - mainly of the UK, the US and their allies on the Security Council - is that the mission will be withdrawn," he added.
UN Ambassador Mark Lyall Grant, whose country Britain drafted the resolution, said: "We believe that it's the right thing to do to give that mission a final chance to be able to fulfil its function."
Grant said the extension would be "final unless there's a change in the dynamic on the ground".
"In particular ... there should be a cessation of use of heavy weapons and there should a sufficient reduction in the violence to enable UNSMIS to carry out its mandate ... As you know, for the last 35 days UNSMIS has not been able to carry out its mandate."
Russia and China on Thursday vetoed a Western-backed resolution that would have extended the mandate.
The two countries, both Syria's allies, said they could not accept the resolution's call for sanctions against al-Assad's government if it fails to rein in its campaign against a widening rebellion.
Susan Rice, the US ambassador to the UN, had said on Thursday that Washington would "probably" support the British resolution and described the Pakistani resolution as a simple technical rollover.
"We have been clear, we are not supporting a technical rollover," she told reporters.
Li Baodong, China's UN ambassador, said Beijing supported Pakistan's proposal for a technical rollover of the mission for 45 days, which Russia also said it would support.
Russia and China have so far vetoed three different resolutions designed to pressure Assad and halt the 16-month
conflict that has killed thousands.