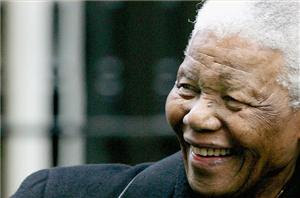 People in South Africa and across the world are celebrating Nelson Mandela's 94th birthday by dedicating 67 minutes of their time to help others.
The country's 12 million schoolchildren began their day on Wednesday with a special birthday song for the former president, ringing with the line: "We love you father".
"As we celebrate his birthday, we remember that he fought for us in the struggle. The struggle was to fight apartheid," said 12-year-old Kgaugelo Masunhloane at Batsogile primary school in Soweto.
In 2009, the United Nations agreed to commemorate Mandela's birthday every year to recognise the Nobel Peace Prize laureate's contribution to resolving conflicts and promoting race relations, human rights and reconciliation.
People all over the world were enouraged to devote 67 minutes of their day to public service, to honour Mandela's 67 years in politics.
Volunteers carried out a wide variety of tasks including building houses, feeding the poor and cleaning schools.
President Barack Obama and former president Bill Clinton paid tribute to Mandela ahead of his 94th birthday, as having "abiding humility" and "unbreakable will".
Paying tribute
"On behalf of the people of the United States, we would like to extend our heartfelt congratulations to Nelson Mandela on the occasion of his 94th birthday and the fourth annual Nelson Mandela International Day," the US first couple said in a statement honouring the anti-apartheid icon.
Obama's Democratic predecessor Bill Clinton, meanwhile, hailed his close ties with Mandela before visiting the South African icon's home in his childhood village.
Before the visit Clinton opened a library at a primary school together with Mandela's wife, Graca Machel, and daughter Zindzi ahead of the statesman's birthday.
"We worked together as presidents and even after we left office we continued working together to improve education of the children worldwide in order for them to share the future," Clinton said.
Mandela was jailed for 27 years by the country's white minority government for resisting apartheid rule.
On his release in 1990, he led negotiations with apartheid rulers, a process that culminated in his election as the country's first black president in 1994.
Mandela stepped down as president in 1999, after serving one term in office and is still revered around the world for promoting peace and fighting against racism and HIV/Aids.
We have curated some of the activities that people engaged in and shared on social media.