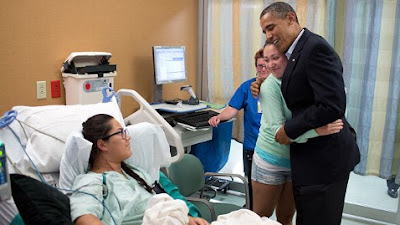 As the nation tries to piece together what drove the largest mass shooting in U.S. history, President Barack Obama traveled to the town of Aurora, Colo., today to console the wounded and the loved ones of those lost in Friday’s movie theater tragedy.
After more than two and a half hours of private meetings with the distraught victims he emerged, red-eyed, to quote scripture.
“He will wipe away every tear from their eyes,” the president said in a hallway of University of Colorado Hospital, quoting from Revelation 21:4. “Neither shall there be mourning, nor crying, nor pain any more. For the former things have passed away.”
Obama told assembled press of his mindset when he approaches families who have lost their own.
“I come to them not so much as a president, but as a father and husband,” he said. “And I think that the reason these stories have such an impact on us is because we can all understand what it would be to have somebody we love taken from us. What it would be like.”
Those who met with the president held conversations “filled with memory,” he said.
“It was an opportunity for families to describe how wonderful their brother, or their son or daughter, was and the lives that they have touched,” he said.
Admitting that words were inadequate in these situations, Obama said he tried to assure them the world had them in their prayers.

Twelve were killed when a gunman unloaded four weapons’ full of ammunition into a packed midnight premier of “The Dark Knight Rises,” a new Batman movie. Police say the suspect, James Holmes, wounded an additional 58 in the chaos, most of them through gunfire. The high number of casualties has made it the largest such incident in the country’s record.
Remarking on national attention to “the perpetrator of this evil act,” the president said he was sure his memory would fade away after feeling the “full impact” of justice.
“What will be remembered, are the good people who were impacted by this tragedy.”
Five minutes away from the theater, the university hospital received 23 of those injured in the attack. Ten remained as of the president’s visit, with seven in critical condition.
The president met with some of those remaining patients in the intensive care ward. Two young women in particular stood out in his mind — 19-year-old Allie Young and best friend Stephanie Davies.
Young, according to the president, was seated very closely to the gunman when he threw canisters of smoke or tear gas into the crowd. Jumping out of her seat to warn the moviegoers, she was instantly shot in the neck, rupturing an artery.
“Apparently as she dropped down to the floor, Stephanie — 21 years old — had the presence to drop down with her, pull her out the aisle, place her fingers over where Allie had been wounded, and apply pressure the entire time while the gunman was still shooting,” he said. “Allie told Stephanie she needed to run.”
Davies refused, said the president, and the young woman instead dialed 9-1-1 with her other hand. She remained with her friend until authorities arrived and then helped move her across two parking lots to awaiting ambulances.
“They represent what’s best of us, and they assure us that out of this darkness a brighter day is going to come,” the president said.
The role of consoler has become familiar to Obama, who has witnessed four other violent shooting rampages since assuming office. But unlike the shootings at Fort Hood, Texas, and Tucson, Ariz., this visit would not see his presence at a formal memorial service. Instead, the president elected to remain in the more intimate confines of the hospital, for now.
He spent about three hours total in Colorado after his plane touched down at Buckley Air Force Base, which itself was affected by the tragedy. The base lost two service members: airman Staff Sgt. Jesse Childress, 29, and Petty Officer 3rd Class John Larimer, 27.
Obama also met with local officials in Aurora, including Gov. John Hickenlooper, Mayor Steve Hogan, and police chief Daniel Oates, who accompanied him to the hospital. Earlier this morning Hogan told ABC’s This Week that Obama’s presence “means a lot” for his town.
“I think the president coming in is a wonderful gesture,” Hogan said. “He’s coming in, really, to have private conversations with the families.  I think that’s totally appropriate.  You know, as the governor’s indicated before, he certainly could have come to the vigil, but that would have made the focus on the president, not on the community, and he was well aware of that.”
Hogan said he has received phone calls from the president and others “literally from around the world,” since Friday.
“We need a little bit of time to grieve, and then start to heal, and it’s just good to know that others care,” Hogan said.
In a separate interview, Oates said the families’ “pain is undescribable.”
“We can’t feel it the way that they do,”. “I am glad that the president is coming today and they can at least get some kind of comfort from him. But it’s just, the whole thing is just so damn horrible.”
Oates’ own daughter was at a Batman premier that fateful night, but was found at a different theater in Aurora.
Friday’s rampage has brought the politics and deprecation of campaign season to a halt, with the president and Mitt Romney cancelling trips and interviews as national leaders paused to reflect on the tragedy and offer their condolences. And for at least today that refrain remained; tonight he travels to San Francisco, ahead of prescheduled trips across five states beginning Monday.
Campaign spokeswoman Jen Psaki told the traveling press a grassroots event in Portland, Ore., was nixed out of respect for what she called a “different energy and enthusiasm” it would have generated. Additionally, all television ads from Obama’s reelection committee will be pulled in Colorado for the week.
This was the president’s second visit to the state in less than a month to cope with loss. In late June he toured a Colorado Springs neighborhood to console homeowners caught in devastating wildfires. At least two were killed in the blaze, which devoured hundreds of homes.
Vice President Joseph Biden is scheduled to speak Monday to the National Association of Police Organizations in Palm Beach, Fla., where he is expected to address the law enforcement community’s response to the shooting.