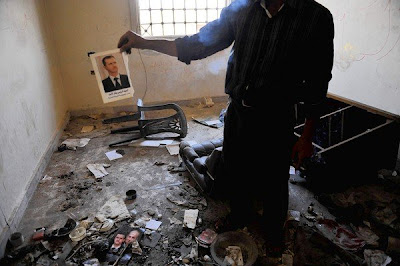 Syrian opposition fighters have taken control of a number of border crossings with Iraq and Turkey, as state television said the country's intelligence chief, who sustained injuries during Wednesday's attack, has died.
Rebels were in control of the Abu Kamal border crossing near Iraqi town of al-Qaim, on the Damascus-Baghdad highway and one of the most important trade routes in the Middle East, Hakim al-Zamili, head of the security and defence committee in Iraqi parliament, told a local television station on Thursday.
Qassim al-Dulaimi, Iraqi Army Brigadier General said the rebels forced the border guards from their posts but did not cross into Iraq. Al-Qaim is located about 320km to the west of Baghdad.
However, local Iraqi officials said two other major border crossings remained in control of the Syrian regime.
Mohammed Fathi, spokesman for the governor of Iraq's western Anbar province that includes al-Qaim, said the largest port at al-Walid, which is also located near the Jordanian border and accounts for an estimated 90 per cent of traffic between Iraq and Syria remained in the government's hands.
Iraq has closed the al-Qaim crossing and sent two army brigades and a helicopter unit from Baghdad to the border between al-Qaim and Walid, according to a spokesman for the Anbar provincial council. The border between Iraq and Syria extends for 605km.
Al Jazeera's Jane Arraf, reporting from Irbil in northern Iraq, said: "According to sources, military presence is believed to be there to prevent infiltration."
Head of UNHCR has appealed to Iraqi government to reopen the border to allow Syrians to cross the border, she said.
Rebels have also taken control of two posts at Bab al-Hawa and Jarablus along the border with Turkey after fierce gun battles on Thursday.
"Rebel fighters seized control of the Bab al-Hawa crossing [in the northwestern province of Idlib]," the UK-based Syrian Observatory for Human Rights said.
"The crossing is under our control. They withdrew their armoured vehicles," said a rebel fighter who would only be
identified as Ali, being treated for wounds on the Turkish side.
The carcasses of burnt-out Turkish heavy duty vehicles were scattered across the scene of the battle. Some 150 armed rebel fighters were in control of the post, which lies opposite Turkey's Cilvegozu border crossing in the southern province of Hatay.
Al Jazeera's Isil Sariyuce, reporting from Reyhanli in Turkey near al-Hawa border crossing, said: "Truck drivers coming from Syrian side said they did not find any Syrian officials at the border check point to stamp their papers and passports."
"They claimed that the border was under the control of Free Syrian Army but it does not mean it control the entire region as there is military base just one km from here.
"It is important for FSA to control this border crossing which is just 50km from Syria’s second biggest city, Aleppo."
Government offensive continues
Assad forces have launched an assault on the eastern Damascus neighbourhood of Jubar, the Britain-based Syrian Observatory for Human Rights (SOHR) said on Friday.
"Syrian regular forces, including trucks and cars packed with heavily armed men, stormed the district of Jubar," the Britain-based watchdog said, adding that "searches had begun" in the neighborhood.
The reported assault came shortly after Syrian state television announced that regime forces had "cleaned" the al-Midan neighbourhood of "terrorists".
"Our brave army forces have completely cleaned the area of Midan in Damascus of the remaining mercenary terrorists and have reestablished security," the broadcaster said.
It said authorities seized large quantities of weapons including machine guns, explosive belts, rocket-propelled grenades and communications equipment.
Damascus activist Khaled al-Shami, contacted via Skype, said rebels carried out a "tactical" retreat early on Friday to spare civilians further shelling after five days of intense clashes between opposition fighters and regime forces.
The Observatory, in an earlier statement, said "seven tanks and two armed personnel carriers stormed the district" of al-Midan, in southern Damascus.
Clashes were also reported in Kafr Souseh and Al-Hajar Al-Aswad on outskirts of Damascus between Syrian regime forces and rebel fighters.
Intelligence chief dead
Fighting has intensified over the past week as rebels closed in on the capital and launched their most serious blow yet on Assad's inner circle, killing top aides in a bomb blast Wednesday as they attended a security meeting.
National security chief and close Assad adviser, General Hisham Ikhtiyar, died on Friday of wounds suffered in the bombing, the fourth member of Assad's inner circle to die in the blast, according to state-run TV.
Meanwhile, the United Nations refugee agency, UNHCR, said on Friday that up to 30,000 Syrian refugees might have crossed into Lebanon in the past 48 hours to escape fighting in their country.
"We have reports we are trying to verify that thousands of Syrians overnight and yesterday crossed into Lebanon. So far reports vary between 8,500 and 30,000 people may have crossed in the past 48 hours," Melissa Fleming, chief spokeswoman of the UN High Commissioner for Refugees, said.
"Borders remain open...people continue to flood into Lebanon."
One million Syrians are also believed to be internally displaced within the country as of last week, she told a news briefing in Geneva. The figure came from the Syrian Arab Red Crescent whose previous estimate was that 500,000 were uprooted.
Al Jazeera's Zeina Khodr, reporting from Massna in eastern Lebanon, said: "People fleeing Syria said they were scared, they could not sleep at night, and they heard sound of guns and explosions. They were worried and arriving to seek safety."
"Army beefed the security along the border but Lebanon and Syria have long and porous border.
"There are many illegal routes that have been used by the opposition fighters and people who have been wounded to come to Lebanon.