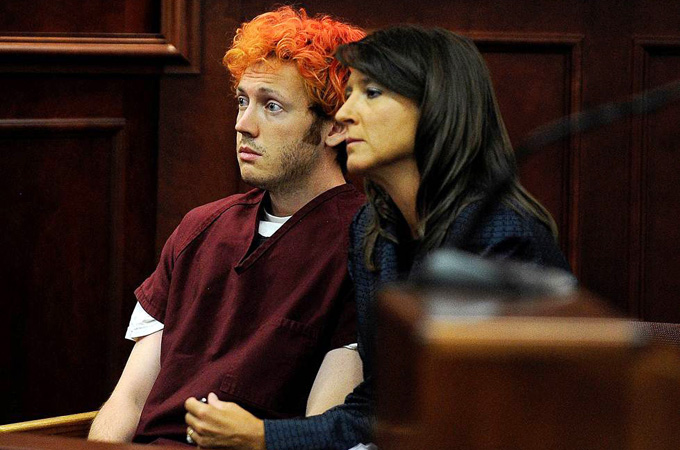 The former graduate student accused of opening fire at a Denver-area screening of the latest "Batman" film, killing 12 people, has been formally charged with 24 counts of first-degree murder and 116 counts of attempted murder.
James Holmes, 24, was formally charged on Monday during his second court appearance since his arrest after the massacre during a packed showing of "The Dark Knight Rises" shortly after midnight on July 20.
The rampage left 12 dead and 58 injured, several critically.
Holmes, wearing jail garb with his hair still dyed orange but with the color fading to pink in places, sat impassively with two defence attorneys through the 45 minute hearing.
But he looked more alert than during his first court appearance one week ago, when he looked dazed and groggy. The courtroom was packed with members of the media and family members of victims.
Holmes spoke only once on Monday, answering "yes" when Arapahoe County District Judge William Sylvester asked if he understood the charges against him.
Unopened parcel
Prosecutors essentially charged Holmes with two murder counts for each victim - one standard first-degree murder charge plus one count of murder with extreme indifference.
In all, prosecutors have charged Holmes with 142 criminal counts in the shooting, the 24 murder and 116 attempted murder counts plus one count of possession of an explosive device and one count of committing a crime of violence.
During the hearing, defence attorneys asked that prosecutors turn over evidence collected in the case. They are seeking a package that news reports have said was sent by Holmes to a University of Colorado psychiatrist, Dr. Lynne Fenton.
Prosecutors responded that they had not yet opened that parcel, which according to Fox News contained a notebook outlining the shooting scenario, including stick-figure drawings.
Holmes, a San Diego native, was a doctoral student of neuroscience at the university's Anschutz campus before filing paperwork to drop out in June.
Court documents filed on Friday by defence lawyers said Holmes had been under Fenton's care.