In Pakistan Taliban Kill 10 in Attack on Rival 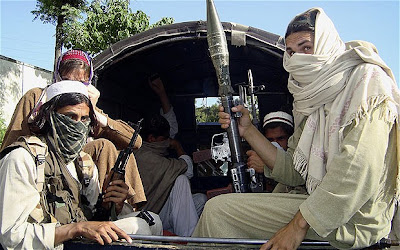 A Taliban suicide car bomber attacked a rival militant commander's compound in northwestern Pakistan on Saturday, killing at least 10 people, as heavily armed assailants killed eight members of the coast guard in the southwest, officials said.
There has been significant infighting over turf and leadership positions within the Pakistani Taliban, an umbrella organization set up in 2007 to represent roughly 40 insurgent groups, many of whom are waging a bloody campaign against the government.
The compound that was attacked in Spin Dal village in the Orakzai tribal area was owned by militant commander Mullah Nabi, said senior tribal police official Amjad Khan. Nabi was once a close ally to a prominent Pakistani Taliban commander from Orakzai, Mullah Toofan, but the two are now fierce rivals.
Nabi was at the compound when the attack occurred but was not hurt, said Khan. The 10 killed included five children, he said.
The Pakistani Taliban claimed responsibility for the attack, with spokesman Ahsanullah Ahsan saying it was carried out because Nabi had turned against the Taliban. Ahsan spoke by telephone from an undisclosed location.
The Pakistani army has waged multiple offensives against the Pakistani Taliban in Orakzai and other parts of the tribal region, but the militants continue to stage frequent attacks against military and civilian targets.
The coast guard camp that was attacked Saturday was in the port city of Gwadar in Baluchistan province, said local coast guard official Hidayat Ullah. The assault initially killed six members of the force and wounded two others, but they later died of their wounds, said Ullah.
No group has claimed responsibility for the attack. Baluchistan is home to both Islamist militants and nationalists who have been waging a decades-long insurgency against the government for greater autonomy and a larger share of the province's natural resources.
A roadside bomb also exploded near a passenger bus elsewhere in the northwest Saturday, killing three people, said police officer Zahir Shah. The attack in Upper Dir in Khyber Pakhtunkhwa province also wounded seven people, Shah added.