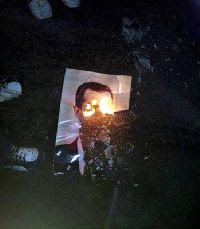 Senior officials looking into the role the U.N. could play in Syria if Bashar Assad falls from power face major obstacles, including a bitter division among world powers and the absence of an opposition leader.
A team of senior U.N. officials led by Deputy Secretary-General Jan Eliasson is consulting on the Syrian crisis and studying contingencies, and one possible model might be Afghanistan.
After the ouster of the Taliban by U.S.-led forces in 2001, the U.N. moved quickly to fill the political vacuum, convening world leaders and prominent Afghans in Bonn, Germany, to consider the country's future.
Participants adopted an accord on Dec. 5, 2001, spelling out arrangements for an interim government. The U.N. Security Council swiftly endorsed the power-sharing agreement, and on Dec. 20, 2001, it unanimously authorized a multinational force to assist the new government with security.
Emile Hokayem, a Middle East analyst at the London-based International Institute for Strategic Studies, said that in the case of Afghanistan the major powers were united, making for an easier initial transition.
"In the case of Syria, the great powers are fighting," he said. So "U.N. action is not going to be easy."
Since the Syrian conflict began in March 2011, the U.N. Security Council's veto-wielding permanent members have been split.
Russia, the Assad government's most powerful ally, and China have vetoed three Security Council resolutions backed by the U.S., Britain and France targeting the regime's bloody crackdown. The first two resolutions would have condemned Syrian attacks on peaceful protesters but the most recent resolution went further, threatening sanctions if Assad didn't immediately withdraw heavy weapons from populated areas.
The only thing the five permanent members united to support is the six-point peace plan brokered by Kofi Annan, the U.N.-Arab League envoy, which called for a cease-fire in August and Syrian-led political talks to end the conflict and "meet the aspirations of the Syrian people."
But despite pledges by the government and opposition to implement the plan, a cease-fire never happened, and fighting continued to escalate to a point where the conflict was recently declared a civil war. For many diplomats and military experts, Annan's plan is all but dead.
If Assad were to fall, it's unclear whether the major powers could unite again at a Bonn-style summit to set a roadmap for Syria.
For the United Nations, which deals with the governments of its 193 member states, the immediate question if Assad fell would be who — or what political group — replaces him.
In the case of Syria, there is a divided opposition outside the country and disparate groups of young fighters inside the country, some aligned to the Free Syrian Army.
Attempts to unify the opposition and agree on a leader have repeatedly failed. Participants at a meeting of opposition groups in Cairo earlier this month did agree on fundamental principles for a post-Assad Syria and a general outline to guide the opposition through a transitional period — but scuffles and fistfights during the session and a walkout by a Syrian Kurdish group visibly demonstrated the opposition's disarray.
Andrew Tabler, a senior fellow and Syria expert at the Washington Institute for Near East Policy, said even if Assad departs he doesn't think protesters will leave the streets and the Free Syrian Army will stop fighting because they want the entire regime to go.
"So what would happen is you're likely to have a contraction of the regime, controlling some parts of Syrian territory, and the opposition controlling parts — like the Balkans," he said.
In the Balkans in the 1990s, the U.N. established safe havens but Tabler said they couldn't defend themselves, so that option would likely not work.
If Assad left, the Security Council could authorize a U.N. peacekeeping force to go into Syria, which would normally take several months to deploy in the field.

But council members would likely be wary, and want to ensure there was a peace to keep — especially after the 300-strong U.N. observer force sent to monitor Annan's peace plan was forced to suspend most operations because of the escalating violence. It has been given a final 30-day mandate to its mission, leaving the door open for a possible extension if the government stops using heavy weapons and there is a significant reduction in violence.
"The idea of a U.N. peacekeeping force could reduce the spread of sectarian fighting," the IISS' Hokayem said. But "I don't see any readiness to approve any troops."
After the third double veto by Russia and China on July 19, U.S. Ambassador Susan Rice said the United States and others "will have no choice but to look to partnerships and actions outside of this council to protect the Syrian people."
The Washington Institute's Tabler said he envisioned "a coalition of the willing" coming from the Friends of Syria political group, which wants to see a democratic government in Syria, being key in post-Assad decisions.
Hokayem said he suspects Syria's immediate and regional neighbors like Turkey, Saudi Arabia, Iraq and Jordan will be more relevant than the U.N. in a post-Assad Syria — but they might look to the U.N. to support their actions.
After U.S.-led forces ousted Saddam Hussein from power in Iraq in April 2003, the deeply divided Security Council, which had refused to authorize the U.S.-led invasion, did give its backing to a multinational security force in the country in October 2003.