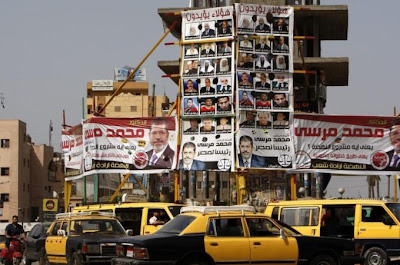 According to workers and a labour activist,
Strikes have brought a swathe of Egypt's state textile industry to a halt, disrupting production of a key export as the country hovers on the brink of a balance of payments crisis.
On Wednesday, around 23,000 employees of Misr Spinning and Weaving, Egypt's biggest textile company, took their strike into a fourth day and were joined by some 12,000 workers at other state firms, labour activist Hamdy Hussein said.
A sprawling complex in the Nile Delta city of Mahalla, Misr Spinning and Weaving was the focus of protests in 2008 that sparked a wave of strikes now widely seen as a catalyst for the street revolt that ended the rule of Hosni Mubarak last year.
Mubarak's overthrow, driven by popular anger at poverty and corruption, raised hopes for better pay and conditions among workers, especially in the textile sector which has suffered from tough competition from private and overseas rivals.
Strikes spread in the weeks after the uprising, helping send the economy into a tailspin from which it has yet to fully recover. The broad labour unrest abated but sporadic strikes continue.
Egypt's balance of payments slid deeper into the red in the first nine months of the 2011-2012 fiscal year, with a deficit of $11.2 bn.
'Labour revolution'
The textile strikes are an early test for newly elected Islamist president Mohamed Mursi as he strives to form a cabinet to replace the army-backed interim administration so he can start tackling the faltering economy.
"The coming revolution will correct the path of the first one. It will be a labour revolution. Workers sparked the
first revolution, then it was stolen from them," said Hussein, referring to how left-wing groups have been crowded out by Islamists and the army since Mubarak was ousted. He estimated that Egypt had around 300,000 textile workers, including 100,000 in the state sector.
Misr Spinning and Weaving employees told Reuters they had been expecting delegations from the ministries of industry and labour to head to Mahalla to negotiate, but none had arrived.
Between 3,000 and 4,000 have staged an open-ended sit-in at the factory to call for a rise in basic wages, a purge of corrupt officials and better conditions at the firm's hospital.
They want an increase in their share of company profits and basic pay of at least 1,500 Egyptian pounds ($250) per month. They say their pay currently ranges from 700 to 1,000 pounds.
They set up tents on Wednesday to ward off sweltering summer heat and put up posters listing demands, complaining of a slide into poverty and poor health and demanding the government bring social justice for the sector.
Labour unrest has also hit the country's ceramics sector. Disputes between workers and management at Ceramica Cleopatra, one of Egypt's biggest privately owned ceramics firms, led to clashes between police and workers in Suez city on Tuesday.
Similar, smaller protests have been staged in front of the presidential palace in Cairo since Mursi's election last month.