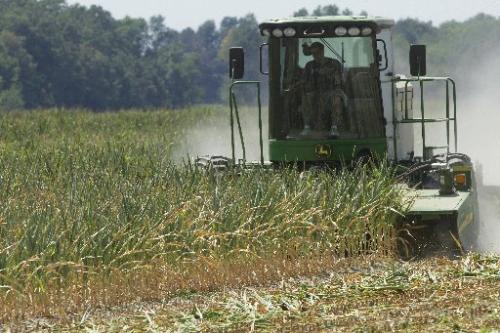 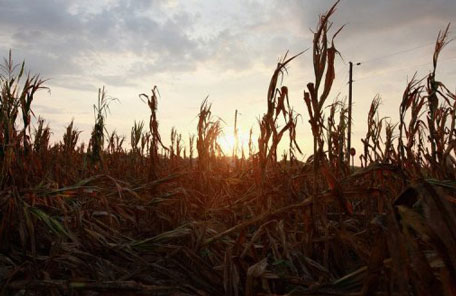 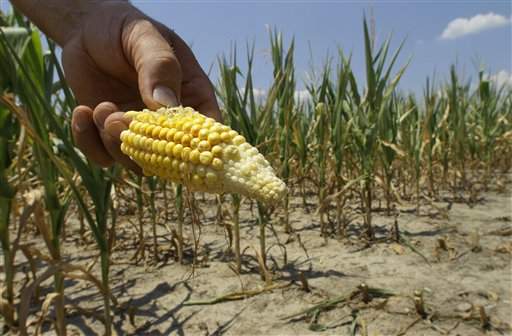 U.S. corn fell on Wednesday in a pause to a 50-percent summer rally sparked by the worst U.S. drought since 1956 as investors cashed out profits, but losses were limited by expectations for the crop to shrink further as the weather remains hot and dry.

Soybeans were also lower, weighed by forecasts for light rain in the eastern Midwest grain belt this week and next that could bring some relief to the stressed crop that sets yields in August. Wheat followed both corn and soybeans lower.

Losses in wheat were capped by inclement weather in Europe, with parts of Kazakhstan and Russia also in drought, but French farmers were back in the fields harvesting their crop following a break in the prolonged wet weather along the Atlantic coast.

"There's some nervousness among the longs. But I don't expect this bull market to truly end until we see crop ratings not decline anymore or actually improve," said grains analyst Dan Manternach of Doane Agricultural Services.

"Weather forecasts certainly have not improved, and ratings are expected to go down again on Monday," he added, referring to the U.S. Department of Agriculture's weekly crop update.

In Missouri, one of the states worst hit by the drought, Governor Jay Nixon announced on Tuesday that all 114 counties in the state have been designated as natural disaster areas due to the drought, making farmers eligible for government loans or other aid.

The drought has devastated crops at a time when a bumper corn harvest was needed to bolster three years of razor-thin stocks in the United States which are eating into profit margins for meat companies and ethanol producers.

U.S. ranchers unable to meet soaring feed costs and whose pastures have been laid waste by the drought have begun reducing herds, which could translate into higher prices for meat next year.

"The dramatic rise in grain prices in the past few weeks is shaping up to be a serious financial blow for wheat importing countries," one German trader said. "African and Middle Eastern countries are now facing painful rises in import bills."

The latest example was Jordan, which cancel led an international purchase tender for 100,000 tonnes of wheat on Tuesday because of high prices but issued a new tender on Wednesday.

"Jordan made its last wheat purchase in a tender on June 27, with the offers it received for wheat on Tuesday Jordan faced an extra cost of $4.5 million to buy 100,000 tonnes of wheat in just four weeks."

"That is a lot of money for many countries to suddenly find in their state budgets."

Updated weather forecasts gave little hope for a quick end to the U.S. drought, now the worst since 1956.

Indeed, there were signs that the drought, which has been centered in the Midwest, was expanding north and west, putting more crops at risk including in states such as Nebraska where large tracts of cropland are irrigated by groundwater and rivers.

The unrelenting hot, dry weather is expected to force further declines in corn crop estimates in the U.S., the world's top exporter of the grain.

A Reuters poll of 13 analysts suggested that the drought was continuing to shrink the U.S. corn crop, with yields likely to fall 7 percent from the U.S. Department of Agriculture's estimate a week ago to 137.2 bushels per acre.

Kazakhstan said it expects a below-average crop this year due to drought in its northern grain belt. The country said hot and dry weather would cut its grain crop to 14 million tonnes this year, a decline of 48 percent on last year's post-Soviet record and undershooting the average of 17 million tonnes over the last nine years.

Russia may export just 10 million tonnes of wheat this year as grain exports fall by half this year from last year's record 28 million tonnes due to low stocks and a drought in the southern breadbasket regions, analyst SovEcon said on Tuesday.