USA storm to Olympic gold in women's artistic gymnastics in 2012 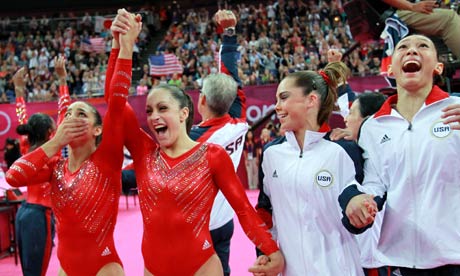 The heavily favoured US women's gymnastics team vaulted to gold in the all-around competition at the London Olympics Tuesday, to claim their first team win since 1996.
Team USA immediately took the lead on an explosive vault performance by McKayla Maroney and never looked back. When the chalk dust had cleared, the team had posted a score of 183.596, well in front of second-place finisher Russia with 178.530 and third-place Romania with 176.414.
Defending champion China faltered early when gymnast Deng Lin fell from the balance beam. The team placed fourth with an overall score of 174.430.
American Jordyn Wieber, the favourite to win the individual all-around competition before she missed qualifying Sunday, won redemption with consistent performances on every apparatus. Both Wieber and teammate Gabby Douglas turned in a 15.933 on the vault, to bolster Maroney's astonishing 16.233.
If the individual American gymnasts suffered points of weakness, none of them surfaced in the all-around. Kyla Ross's sure-footed work on the balance beam and spot-on dismount secured an applause-worthy 15.133. Then Douglas, not known for her beam work, scored a 15.233.
The Americans proved to be flawless where the competition faltered. Russia's hopes for a late-stage boost in floor exercises were disappointed when Anastasia Grishina stopped mid-routine. She left the mat, head bowed, to be consoled by her coaches, with a lackluster score of 12.466.
Last to compete for the Americans was Aly Raisman in the floor exercises. Her team was already solidly in the lead, following a crushing 15.066 from Douglas and a 15.000 from Wieber.
Raisman needed to score just better than 10 to bring home the gold for team USA. She scored just better than 15.