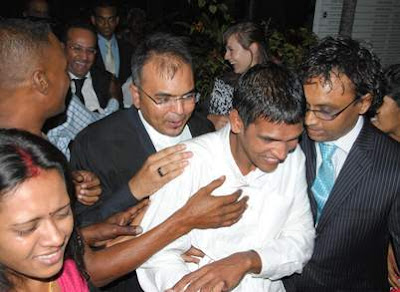 Mauritian prime minister Navinchandra Ramgoolam has announced a new team of detectives would look at the case in an attempt to unearth fresh evidence in the case.
Mr Ramgoolam gave the assurances during a meeting with the Irish ambassador to Mauritius, Brendan McMahon, in Port Louis.
Meanwhile, Ireland's deputy Prime Minister, Eamon Gilmore, thanked the Mauritian authorities for their co-operation.
"I want to thank Prime Minister Ramgoolam for this response and for the co-operation which we are receiving from the Mauritian authorities," he said.
"The Irish Government will continue to meet its full consular responsibilities to Michaela, her husband John and their families, as it does to all Irish citizens."
Mrs McAreavey, 27, a former beauty queen and school teacher from County Tyrone, was killed in her room at the Legends Hotel in January 2011.
She had left her new husband John at the hotel's restaurant to fetch some biscuits from her room.
Legends' hotel workers Sandip Moneea and Avinash Treebhoowoon were cleared of the murder by a jury at the Supreme Court in Port Louis last week.
Mr McMahon told the Mauritian foreign minister, Arvin Boolell, the McAreavey family had been deeply distressed and hurt by the publication of photographs of her body in a Mauritian newspaper.
Mr Gilmore added: "The Prime Minister advised the Ambassador that the Government of Mauritius deeply regretted and condemned the leaking and publication of the photographs which appeared in the Sunday Times of Mauritius.
"He indicated that there would be a thorough police investigation into the matter and that anyone found to be involved faced prosecution."