A series of gun and bomb attacks has racked Iraq for the second straight day, with unidentified gunmen targeting a military base and car bombs exploding in Baghdad, Kirkuk and elsewhere.
More than 100 people are reported to have been killed and 180 injured in at least 19 separate explosions and attacks on Monday morning, officials said.
At least 15 Iraqi soldiers were killed and four others injured after gunmen attacked a military base in Salah Din province, an army official told Al Jazeera.
The attack took place early on Monday morning, while the soldiers were still asleep, in a base east of Dhuluiyah township, about 90km north of Baghdad. No group has yet claimed responsibility for the attack.
A car bomb in the city of Taji, north of Baghdad, targeted a residential compound. Initial reports suggested that more than 18 people had been killed, and dozens wounded. That attack involved a secondary explosion, which targeted rescue personnel who had rushed to the scene.
In the northern oil town of Kirkuk, police were targeted by four synchronised car bombs, killing five people, including three civilians. Nineteen people were injured in those blasts.
Baghdad bombings
In Baghdad, car bombs targeted an interior ministry office that issues ID cards to residents of the city's mainly Shia Sadr City neighbourhood. At least 16 people were killed in that attack.
"It was a thunderous explosion," said Mohammed Munim, 35, who was working at the office.
"The only thing I remember was the smoke and fire, which was everywhere," he added from his bed in the emergency room at Sadr City hospital.
In Baghdad's eastern Husseiniyah neighbourhood, police sources told Al Jazeera that a parked car bomb killed at least three people and injured another 31 on Monday.
In the city of Touz Khurmato, 140km north of Baghdad, a car bomb targeted a local market, killing at least one person and wounding three others. A separate explosion in that city killed one person and wounded 35 others.

In the eastern town of Muqdadiyah, near Baquba, two civilians were killed and 13 injured after a motorcycle bomb went off on a main street.
South of the capital, in Mahmoudiya, a series of three bombs targeted civilians. Initial reports from police said that the death toll in that attack was at least 10, with as many as 38 wounded.
Meanwhile, two members of a tribal coalition aimed at maintaining security were killed by unidentified gunmen in central Samarra city, 120km north of Baghdad.
In Dujail, 75km north of the capital, a bomb went off near a Shia mosque, killing a woman and injuring four others.
In the town of Ba'aaj, near Mosul, two policemen were killed when a suicide bomber targeted a police station, while in a separate explosion west of Mosul, a car bomb killed three army soldiers and wounded six civilians.
In Dewaniyah province, 180km south of Baghdad, an improvised explosive device attack hit a vegetable market, killing three people and injuring at least 20 others.
In central Balad township, about 80km north of Baghdad, a parked car exploded outside the home of a local political leader, Al Radhee Mohammed. That blast did not result in any casualties. A second car explosion, apparently targeting labourers, also went off in Balad on Monday morning, but there was no immediate confirmation of casualties. 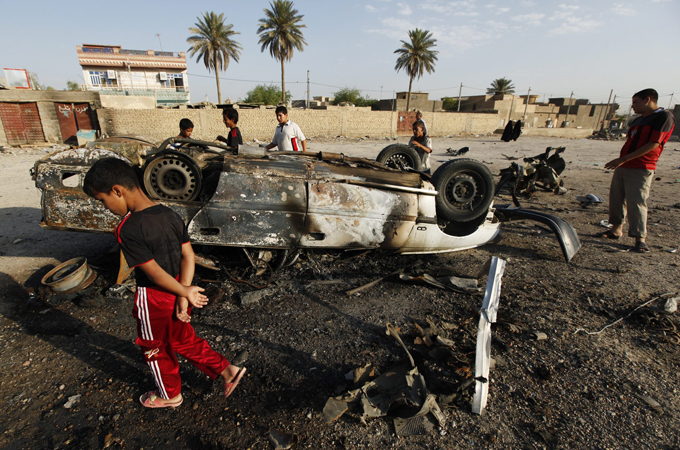 Police say they had identified a third bomb in the same area and had the situation under control.
'Military and Shia targeted'
Al Jazeera's Jane Arraf, reporting from Erbil, said that initial figures were difficult to verify.
"The death tolls are varying wildly [but] they appear to be attacks, as has been the pattern, on military targets as well as Shia communities."
Monday's attacks are the worst since June 13, when a series of explosions killed 84 people. The fresh wave of killings comes just a day after a spate of bombings across the country killed at least 20 people and wounded 88 others.
"It is certainly a sign that despite all gains made against al-Qaeda in Iraq ... they are still out there," reported Al Jazeera's Arraf, adding that the group had recently warned that it was commencing "a new stage" in its campaign.
The Islamic State of Iraq, a group closely aligned with al-Qaeda in Iraq, warned in an audio message posted on jihadist forums that it would begin targeting judges and prosecutors as it renewed its campaign to free members who are currently being held in prison.
"We are starting a new stage," said the voice on the message, purportedly that of Abu Bakr al-Baghdadi, who has been leader of the Islamic State of Iraq since May 2010.
"The first priority in this is releasing Muslim prisoners everywhere, and chasing and eliminating judges and investigators and their guards."
It was not possible to verify whether the voice was that of Baghdadi. Al-Qaeda in Iraq is regarded by Iraqi officials as significantly weaker than at the peak of its strength in 2006 and 2007, but it is still capable of launching spectacular mass-casualty attacks.
Al Jazeera's Arraf said that the attacks have "sparked fears that security forces will not be able to handle what appears to many people to be a resurgence of al-Qaeda" in the absence of US troops, who pulled out of the country at the end of last year.