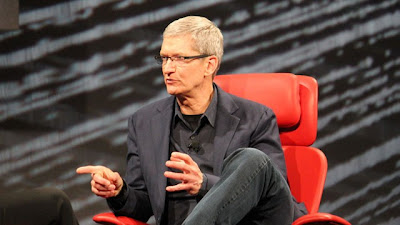 Apple's third quarter earnings, released this afternoon, were below analysts' predictions.
While the quarter is usually one of the slower ones for the tech giant, Apple CEO Tim Cook and CFO Peter Oppenheimer admitted that speculation surrounding the next iPhone -- what many are calling the iPhone 5 -- has affected sales of current iPhones.
Apple said it sold 26 million iPhones, down from 35.1 million in the previous quarter. Presumably, people put off purchases of phones, waiting for a newer model.
"We're reading the same speculation about a new iPhone as you are, and we think this has caused some delay in purchasing," Oppenheimer said.
Of course he was referring to the flood of rumors about the next iPhone, including the ones that say the next version will have a larger and thinner display, a new dock connector, and a faster processor and graphics.
The topic of the rumors came up numerous times on the earnings call with analysts. But no matter how hard analysts pushed, Cook and Oppenheimer would not talk about their product plans for the remainder of the year.
Oppenheimer added later in the call, "The fall transition is driving most of the decline in gross margin, it's not something we are going to talk about in any level of detail."
When Cook was asked about a new feature of iOS 6 called Passbook, which puts all tickets or coupons into one app, he wouldn't elaborate on what Apple might do down the road.
"We try very hard to keep our product roadmap secret and confidential. We go to extreme activities to try and do that," Cook said. "That, however, doesn't stop people from speculating and wondering."
In May, Cook said he was planning to "double down on secrecy" on products, but he conceded it won't stop the speculation.
"I'm glad that people want the next thing, I am super happy about it. I am not going to put energy into getting people to stop speculating, that's not going to amount to anything," Cook said.
Apple is also rumored to be planning a smaller version of its iPad before the year is up, which would compete with Google's recently-announced Nexus 7. Cook wouldn't comment on that and mentioned the $399 version of the iPad 2.
"I think most customers feel that they are not looking for a tablet, they are looking for an iPad," Cook said. "We are going to keep innovating in the space and make new products."
Again, he wouldn't elaborate on those products, which ultimately hit the company's bottom line this past quarter, but he was clear about how Apple intends to keep making those products.
"Our North Star is to maniacally focus on making the world's best products," Cook said. He repeated that word "maniacally" twice during the call.