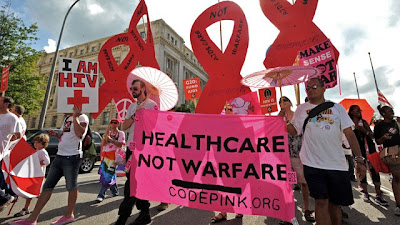 A crimson wall made its way across Washington D.C., Tuesday as more than 1,000 sex workers, drug users and AIDS activists -- many of them carrying red umbrellas to fend off the rain -- marched toward the White House to protest the stigma associated with their activities, a stigma they believe contributes to the spread of HIV/AIDS.
Protesters held up signs reading "Fight AIDS! No More Drug War!" and "Stop the Witch Hunt against Sex Workers."
"Sex work is work" the group chanted, responding to demonstration leaders holding megaphones.
The demonstrators were calling for the decriminalization of drugs and sex work, which they argue would encourage people to practice safer sex.
Quincy McEwen, a sex worker in Guyana, marched in today's protest for sex workers' rights.
"It's our body, our business," said McEwen. "You can give oral sex for free, but if you collect money for it it's illegal. That's wrong."
"That stigma is allowing the disease to spread," she said.
The march was one of five protests that joined -- in front of the White House -- different groups affected by HIV and AIDS. The demonstrations coincided with the 19th International AIDS Conference, which is taking place in the nation's capital this week, the first time the U.S. has hosted it in 22 years. Until 2009, a U.S. travel ban denied visas to people who had HIV. Most protesters delivered their message on posters and chants, but a group of Canadian AIDS activists wore only underwear that bore the message, "I party, I bareback, I'm positive, I'm responsible."
"Bareback" refers to the practice of engaging in sex without condoms.
"People who are positive have sex," said activist Jessica Whitbread. "They should be able to negotiate the kind of sex they want to have. Putting the responsibility of prevention on them creates stigma, and only continues the spread of the disease."
Bryan Floury also opted for a more eye-catching display, wearing a hat littered with different condom brands while holding a sign reading, "Teach Condom Sense." One of the wrappers on his head belonged to a Barack Obama condom, with the tagline "The ultimate stimulus package.
"Everybody likes looking at the guy in condoms," Floury joked, but later, on a more serious note, compared sex education to basic training.
"We need to train students like soldiers, train them to protect themselves," he said.