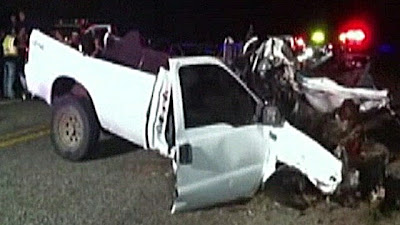 A highway accident just north of Corpus Christi, Texas, has left 13 people dead and 10 injured when a pickup truck carrying 23 people ran off the highway and struck two trees.
A white 2000 Ford pickup was heading north on U.S. 59 near the small town of Goliad late Sunday night with 23 people loaded inside the truck's cab and bed when it veered off of the right side of the highway and crashed into two large trees, Gerald Bryant of the Texas Department of Public Safety said.
"This is the most people I've seen in any passenger vehicle, and I've been an officer for 38 years,"
Six of those killed were still inside the truck when emergency crews arrived to find the severely damaged vehicle, Bryant said.
The Border Patrol is now assisting with the investigation, Bryant said.
"It's unknown whether or not the victims were illegal," he said.
At least 11 people were air-lifted to several different hospitals, including a Corpus Christi hospital, ABC News affiliate KZTV reported. One person died while being transported to the emergency room.
Many of the passengers were thrown from the truck, with one found about 50 or 60 feet away, and the jaws of life had to be used to get some people out of the truck's cab, according to KZTV.
Men, women and children were reportedly in truck when it crashed.