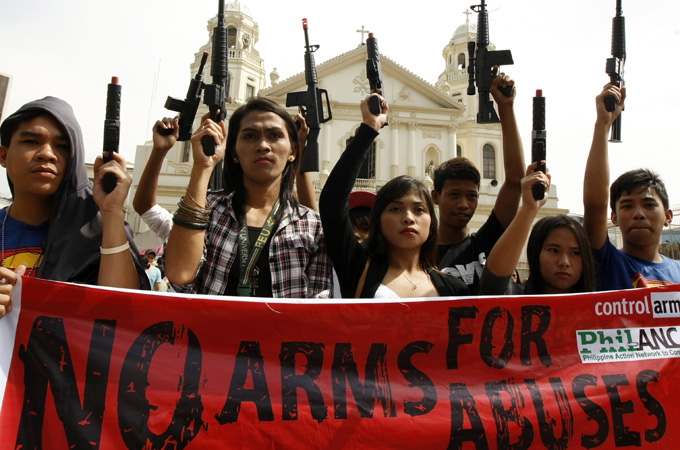 Negotiators at the United Nations are working to put final touches on a treaty cracking down on the global, $60bn business of illicit trading in small arms, a move aimed at curbing violence in some of the most troubled corners of the world.
Delegates from 170 countries are working to reach consensus on a final draft as a Friday midnight deadline (04:00 GMT Saturday) looms in New York.
A revised draft of the treaty had raised hopes from supporters and the British government, which has been the leading proponent, that a historic agreement could be reached.
But the United States and Russia, the two leading arms manufacturers and exporters, on Friday said they needed more time.
Brian Wood of Amnesty International, following the negotiations, said he doubted that an agreement would be reached.
"I believe there are some countries like Iran, Syria, North Korea and others which really don't like the treaty," he told Al Jazeera.
"The Chinese delegation announced that they would only allow the European Union to be a state party to this treaty if the European Union ended its arms embargo on China by the end of today. As soon as they said that, a lot of delegates in the room just burst out laughing."
Wood said, however, that world powers had a historic chance to set global rules to govern the arms trade.
"The last time world powers tried to do this was in the 1920s and it failed ... It's taken all this time to bring them back together.
"After three years of preparatory meetings ... it's almost like the Olympics, 'will they run that last lap and get that gold medal, and put those rules in a treaty'?"

Expressing concern over the "very limited progress" made during month-long negotiations, UN chief Ban Ki-moon on Thursday urged member states to "show flexibility and work in good faith towards bridging their differences."
The secretary-general said: "We owe it to all the innocent civilians who have fallen victim to armed conflict and violence."
A draft treaty circulated on Tuesday was severely criticised by rights groups, including Amnesty International and Oxfam, as full of "ambiguities and loopholes," especially in not including ammunition and allowing too much scope for arms transfers that would escape the treaty.
A second draft proposed Thursday evening by Argentine career diplomat Roberto Moritan, was seen as an improvement by the groups.
The draft states that every country must determine if the arms sold may be used to perpetuate human rights violations or terrorism.
In the United States, gun activists, especially the powerful National Rifle Association, denounce it as an attack on their constitutional right to bear arms.
"Without apology, the NRA wants no part of any treaty that infringes on the precious right of lawful Americans to keep and bear arms,'' NationalRifle Association Executive Vice President Wayne LaPierre told the UN earlier this month.
The issue of gun control, always politically explosive one for American politicians, has re-emerged since last week's shooting at a Colorado cinema killed 12 people
In Washington, a bipartisan group of 51 senators threatened to oppose the treaty if it falls short in protecting Americans' constitutional right to bear arms.