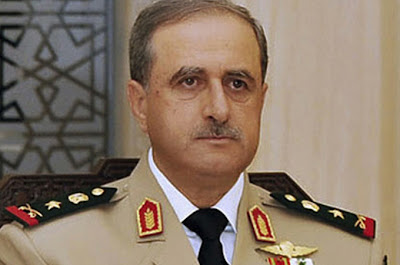 General Daoud Rajha, the Syrian defence minister, deputy general commander for the Syrian army and deputy prime minister, was killed on July 18 2012 when the National Security building in central Damascus was targeted by a suicide bomber during a meeting of high-level officials on Wednesday. The blast also fatally injured deputy defence minister Assef Shawkat, while others reportedly sustained serious injuries.
Rajha, who previously served as army chief of staff since 2004, succeeded his predecessor Ali Habib Mahmud as defence minister in August 2011, reportedly for his loyalty to Syrian President Bashar al-Assad’s regime.
Washington imposed sanctions on Rajha in March, including a freeze of any assets held in US jurisdiction and a ban on conducting any business with Americans.
Born in 1967, Rajha was a Greek Orthodox Christian, a rarity for the Alawite-dominated Syrian military and government.
After being trained as an artillery specialist in the military academy, he reached the rank of lieutenant general in 1998 and general in 2005.
In May of this year, the Free Syrian Army claimed that it had killed six high-ranking officials - one of which was allegedly Rajha - within Syrian President Bashar al-Assad’s regime. The original claim was that a bodyguard of a senior official had poisoned the officials, but rumours of his death were dispersed when he was re-appointed for the same post in June.
General Assef Shawkat, deputy defence minister
Al-Assad's 62-year-old brother-in-law, Assef Shawkat, also reported to have been killed in the suicide attack, was one of the pillars of Assad family rule.
Widely seen as a member of the president's inner circle, Shawkat was appointed deputy head in 1994 and then chief of military intelligence in 2005. He became deputy defence minister in September 2011.
US diplomatic cables published by Wikileaks described him as both a clever, well-read officer and as part of Syria's "killing problem".
Born in 1950 to a middle-class Alawite family in Tartous, Shawkat joined the army in the late 1970s, working his way up through the ranks.
His big break came when he divorced his first wife and married Bushra, Bashar's older sister, despite the fact that late Syrian President Hafez al-Assad and his eldest son Basil initially disapproved of the match.
However, Shawkat's relationship with the new generation of Assads appears to have remained tempestuous. Diplomats say Maher, Bashar's younger brother and head of the elite Republican Guard, once shot him in the stomach, and that Bashar himself was wary of his brother-in-law.
The US and EU imposed sanctions on Shawkat in 2011, accusing him of playing a key role in suppressing demonstrations. He was also sanctioned in 2006 by the US for the suspicion that he orchestrated the assassination of former Lebanese prime minister Rafik al-Hariri and other officials seen as threats to Syrian influence.
In March he was listed by opposition leaders as one of the six officials to have been poisoned along with Rajha. Syrian state TV confirmed that he was in fact killed alongside Rajha in a suicide attack on July 18, 2012.