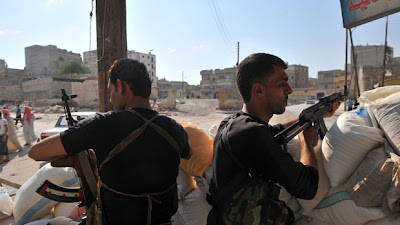 Opposition activists say fighting raged through the night in many neighbourhoods of Aleppo, bringing the conflict in Syria's largest city into its fifth day.

Syria's commercial hub is about 60 kilometres from neighbouring Turkey, which announced Wednesday it was closing its 911-kilometre border with its neighbour to trucks due to the unrest.

Syria's ragtag rebel army, which has little central organization, has seized at least two crossings into Turkey. Dozens of Turkish trucks were looted and captured by armed men last week at the Bab al-Hawa crossing.

The move cuts off an important import route for supplies for the Syrian state.

Fierce fighting spread through several neighbourhoods of Aleppo on Tuesday, with government forces fighting rebels with helicopters and tanks.