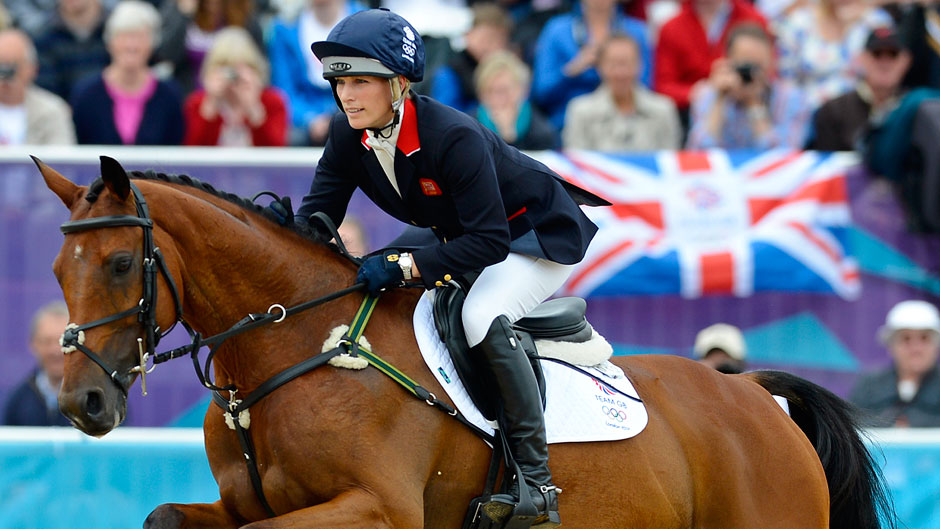 The queen's granddaughter Zara Phillips added to the family silver on Tuesday, helping team Britain to a second-place finish behind Germany in Olympic equestrian eventing in London.

Princes William and Harry and William's wife Kate were in the stands to cheer on their cousin as she competed in the show jumping final portion of the three-discipline event.

After racing through the treacherous cross-country course on Monday without any penalties, Phillips knocked down a rail on the second jump Tuesday in the stadium at Greenwich Park. Teammate Nicola Wilson knocked down one as well, dashing Britain's chances for gold.
Nevertheless, Phillips' combined score of 53.1 from three days of competition was low enough that she advanced to the individual show jump final Tuesday afternoon where she had a clean, penalty-free round.
While that score likely put her out of individual medal contention, it didn't stop Phillips from pumping her fist in the air and taking a victory lap around the ring to acknowledge the wild applause from the stands.
Germany went into the event atop the standings and maintained the lead throughout, ending with a final score of 133.7. Britain's final score was 138.2, while New Zealand had 144.4. The United States was seventh with 208.6.
In equestrian eventing the lowest penalty score wins.
"Unfortunately we couldn't quite do it," Phillips said. "We can't be disappointed with a silver medal because it's an amazing thing to be here."
German rider Dirk Schrade on King Artus, in 10th place in the individual standings with a score of 50.6, said he merely did what was required to help his country.
"That is the job I am expected to do," he said. "If someone can't do that, they don't make the team."
In the show jump phase of the team event, Phillips incurred four penalty points when her horse, High Kingdom, knocked down the second fence. He completed the rest of the course cleanly, albeit a bit over the 83-second limit. The crowd gasped when the rail came down but applauded warmly as she finished.
"It was my fault," Phillips said. "After that he jumped fantastically."
Phillips, a former world and European eventing champion who is 14th in line to the throne, said she had put High Kingdom in a tough takeoff spot as she approached the jump, leaving him little room to maneuver.
"I'm just disappointed for the team," she said.

Britain's William Fox-Pitt, who was in 15th place with Lionhart, said the presence of royals in the stands didn't affect Phillips or the rest of the team.

Britain won silver in the 2004 Athens Games and bronze in 2008. Germany won gold in the 2008 Olympics and were in first place in Athens but dropped from medal contention after a technicality.

Phillips said she appreciated the effort her relatively inexperienced bay gelding gave her, given he lost two shoes during the arduous cross-country portion of the event on Monday.
Then, the 31-year-old granddaughter of Queen Elizabeth II scored a penalty-free ride, negotiating High Kingdom over 28 obstacles and a slippery course that claimed a dozen fallen riders. Her score helped bring Britain into second place in the team standings behind Germany heading into the final portion of the event.
Some of the first horses out on the show jump course Tuesday morning looked tired, with several pulling down multiple fences and incurring time penalties beyond the 83 seconds allowed. But Fox-Pitt — the first British rider out — had a clean round, drawing raucous, foot-stomping cheers from the flag-waving hometown crowd.
The show jumping portion of eventing is designed to test the horse's agility and ability to recover from the difficult run the day before. The lowest three scores for each team count for the team total. The lowest 25 scores go forward to the individual jumping competition.
As they did on Monday, William and Harry watched the competition from the VIP section of the main equestrian arena, joined by Camilla, Prince Charles' wife, and Phillips' mother Princess Anne, herself an Olympian eventing competitor.
Germany's Jung wins individual gold
Michael Jung of Germany, riding Sam, won the individual eventing gold medal on Tuesday.
Sara Algotsson Ostholt of Sweden, aboard Wega, won the silver, while Sandra Auffarth of Germany, riding Opgun, won the bronze.