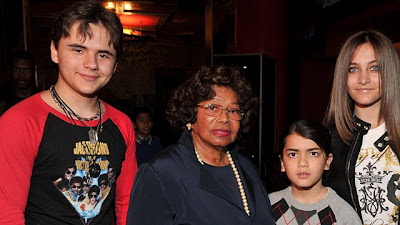 A lawyer for Katherine Jackson, Michael Jackson's mother and his children's legal guardian, said that she and the children do not know where their grandmother is and she believes the family matriarch is being kept in the dark about what has happened.
"We don't know where she is," attorney Sandra L. Ribera told "Nightline." "We know that she is in Arizona, allegedly, but we don't know where because law enforcement won't give us the address, because it is an ongoing investigation."
Watch the full story on "Nightline" tonight at 11:35 p.m. ET
Katherine Jackson, the 82-year-old legal guardian of her late son Michael Jackson's three children -- Prince, Paris and Blanket -- was reported missing on Saturday after her grandchildren hadn't heard from her in days. She was found "resting" with her daughter in Arizona. X17Online obtained a photo of Jackson smiling and playing Uno with family in Arizona.
Michael Jackson's siblings released a statement on Monday saying the missing person's report was "created by the very person and persons we are trying to protect our mother from."
Ribera said that while the Los Angeles County Sheriff's department considered the case closed, they were "exhausting other options" to find Katherine Jackson, including seeking help from the FBI and local law enforcement in Arizona. She said Katherine Jackson is being preventing from contacting her grandchildren "by the people that she is staying with," but she declined to name anyone specifically.
Paris Jackson, 14, tweeted today, "9 days and counting... so help me god i will make whoever did this pay."
Sources told ABC News that a court-appointed child advocate met with Michael Jackson's children Monday night and is working with them so that they can rejoin their grandmother.

Court papers likely will be filed this week to demand that Katherine Jackson be allowed contact with the children. Sources told ABC News that the filing would likely include a request for a temporary guardian for the children, expected to be someone already around the children.

Ribera would not comment on any arrangements concerning temporary custody of the children, but said that Trent Jackson, Katherine Jackson's nephew and confidant who reported her missing, and Tito Jackson's children, including TJ Jackson, were at Katherine Jackson's Calabasas, Calif., home looking after them in her absence.
"All I can say is that efforts are being made as a result of what happened on Monday to make sure that the children are safe and well protected," Ribera said.
The Los Angeles County Sheriff's Department responded to a "family disturbance" at the Jackson family home Monday after Ribera said Randy, Jermaine and Janet Jackson showed up, broke through a security gate and apparently tried to take Michael Jackson's kids away. Ribera said the scene was "chaos."
"It was surprise kind of greeting, it was friendly -- the kids love their aunts and uncles and cousins, of course -- but then it turned into yelling and flailing of arms," Ribera said. "It was very aggressive, a kind of ambush-type scenario, and I saw with my own eyes the kids exit down the back of the house into the canyon to escape."
Sheriff's spokesman Steve Whitmore said Monday there was a "scuffle" between two family members at Katherine Jackson's home, but no arrests were made. Ribera also declined to name who had been involved in the altercation and would only say that Janet Jackson grabbed Paris' cell phone.
"[The children] were very shaken up," Ribera said. "They don't understand why they're being prevented from talking to [Katherine Jackson] and why she's being prevented from calling them. It's been nine days. She's never done this."
Jermaine Jackson released a statement earlier this week about his mother's whereabouts, saying this is all "a conspiracy to deflect attention away from a letter we wrote asking for the resignation of executors" of Michael Jackson's will.
Five of Michael Jackson's siblings last week said his will was fake and the executors of his lucrative estate, John McClain and John Blanca, should step down. Jackson's entire fortune was left to his mother and three kids.
"They [executors of the will] will not stand down because the siblings who were left out of Michael's will want them to," said Zia Modabber, who is the attorney for the Jackson estate.
Howard Mann, Katherine Jackson's business partner, believed money was pulling the family apart.
"I believe that Katherine and the children who are benefactors of the estate fall on one side, and then Randy, Jermaine and Rebbie and Tito fall on the other side," Mann said. "They're a group of people who have a great deal of questions about the administration of the estate."
Modabber said, "I can't speak for them. I don't know what's motivating Jermaine and Randy and some of these others, but money is not a bad guess."
Modabber and Mann faced off in court Monday in a dispute over Mann and Katherine Jackson's selling Michael Jackson merchandise.
"It doesn't matter that it's Howard Mann and he may give some of the money to his family, to Katherine Jackson or anybody else," Modabber said. "You can't take property that belongs to the estate, make money from it, without getting permission from the estate."
Mann's attorney argues the material is and always was owned by Katherine Jackson and her husband, Joe, and not the late King of Pop.
Michael Jackson's estate is worth about $1 billion and counting.