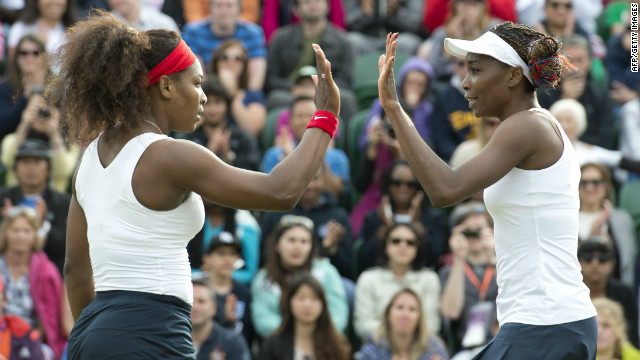 The Williams sisters continued their march towards more Olympic success with three victories between them in London on Monday.
Fourth seed Serena romped into the third round of the women's singles with a 6-2 6-3 win over Poland's Ursula Radwanska, whose older sister Agnieszka she beat to win her fifth Wimbledon title earlier this month.
The American will next face Russian 13th seed Vera Zvonareva, who knocked out 2010 French Open champion Francesca Schiavone.
Zvonareva, the bronze medalist at Beijing four years ago, triumphed 6-3 6-3.
"It was tough conditions, a little windy. I'm glad I was able to pull through," said Williams, who faces a possible quarterfinal against former world No. 1 Caroline Wozniacki or Slovakia's Daniela Hantuchova as she seeks the only major title missing from her collection.
Her older sibling Venus, who is in the same half of the draw, bounced back from her early exits at the French Open and Wimbledon by thrashing Roland Garros runnerup Sara Errani 6-3 6-1 in her delayed first-round match.
"Another gold medal would be amazing," said the 32-year-old, who won the singles title in 2000 along with the doubles, which she and Serena won again in 2008.
"I can't even imagine the feeling, I think my head would be too big and no one would even like me anymore. I've got to get there first, I have two chances and I'll go for it."
Venus will next play Canada's Aleksandra Wozniak, who progressed into the second round by winning 6-2 6-1 against Marina Erakovic of New Zealand.
If she wins that game, Williams will play either German seventh seed Angelique Kerber or Hungary's Timea Babos for a place in the quarterfinals.
That could mean a last-eight clash with world No. 1 Victoria Azarenka, who survived a second-set scare to beat 79th-ranked Romanian Irina-Camelia Begu 6-1 3-6 6-1 in her opening match on Centre Court.
The Belorussian, who lost to Serena in the Wimbledon semifinals, will next face Maria Jose Martinez Sanchez of Spain.
Serena and Venus also won their opening doubles match, beating Romania's Sorana Cirstea and Simona Halep 6-3 6-2 to set up a clash with Kerber and Sabine Lisicki.
Lisicki also moved into round two of the singles, coming from behind to beat Tunisian teen Ons Jabeur -- ranked 297th -- and securing a match against Kazakhstan's Yaroslava Shvedova.
The winner of that tie will likely face world No. 3 Maria Sharapova, who next plays Britain's Laura Robson.
Former world No. 1s Kim Clijsters and Ana Ivanovic will meet in round three, while Czech sixth seed Petra Kvitova -- whose Wimbledon defense was ended by Serena Williams in the quarterfinals -- will take on Italy's Flavia Pennetta.