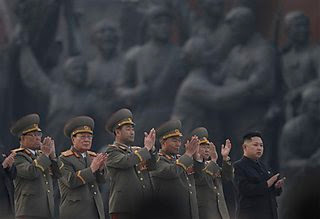 Soldiers danced in Pyongyang's plazas as North Korea announced Wednesday that leader Kim Jong Un was named marshal, a title cementing his status atop the authoritarian nation's military as he makes key changes to the 1.2 million-man force.
State media said in a special noon bulletin that North Korea's military, government and political leadership decided Tuesday to award the top title to Kim, who already is supreme commander of the Korean People's Army. It solidifies his standing seven months into Kim's rule and follows several days of reshuffling at the highest levels of the military.

His new military vanguard — led by a vice marshal introduced Wednesday as the nation's next army chief — presided over a meeting of officers and defense officials attended by The Associated Press.

Hyon Yong Chol, promoted to vice marshal on Monday, was introduced as the chief of the General Staff of the Korean People's Army. He replaces Ri Yong Ho, the vice marshal whose dismissal was announced Monday as being due to illness. Ri, who had held high-ranking military and political posts under Kim Jong Il, had been at Kim Jong Un's side throughout the succession process.

Inside the April 25 House of Culture, officers applauded and cheered the news of Kim Jong Un's ascension to the top military post while soldiers twirled, danced and sang patriotic songs in the plaza outside.

"I am pleased that our cherished desire came into reality," Kim Jong Gum, a student at the Kang Pan Sok Revolutionary School dressed in a military uniform, told AP. "July 18th: This day will be remembered in our hearts as another meaningful and auspicious day."

"In the wake of Ri's stepping down, it takes on added significance," he said. "Titles, of course, do not ensure authority. But the regime would appear to be closing ranks around their young leader."

One by one, Kim Jong Un has collected top posts in the military and party, including first chairman of the National Defense Commission, first secretary of the ruling Workers' Party, chairman of the party's Central Military Commission and member of the Presidium of the Political Bureau. He was made supreme commander of the military in December, just days after his father's death from a heart attack.

It remains unclear how the military reshuffle will affect North Korea's tense relationship with its neighbors and the United States, which stations more than 28,000 troops in ally South Korea.

The South Korean and U.S. militaries have stepped up their monitoring of North Korea's military in the wake of Ri's dismissal, but they've seen no suspicious activities, according to Seoul's Defense Ministry.

Little is known about Hyon, the new army chief. He joined the Central Committee of the Workers' Party, a key decision-making body, in September 2010, and was on the funeral committee for Kim Jong Il — two strong indicators of his rise in stature.

He is among four generals promoted to vice marshal since Kim Jong Un took over.

Kim Jong Il held the title marshal until he was posthumously made "generalissimo" — the nation's top military title — in February, shortly before what would have been his 70th birthday. He had been named marshal 20 years earlier when North Korea founder Kim Il Sung was promoted to generalissimo.

As leader, the young Kim has continued to maintain his father's policy of "songun," or military first, and has sought to inspire loyalty with visits to military units, often with Ri, the ex-army chief, at his side. However, he also has made building up the economy a priority and promoting officials with economic expertise.