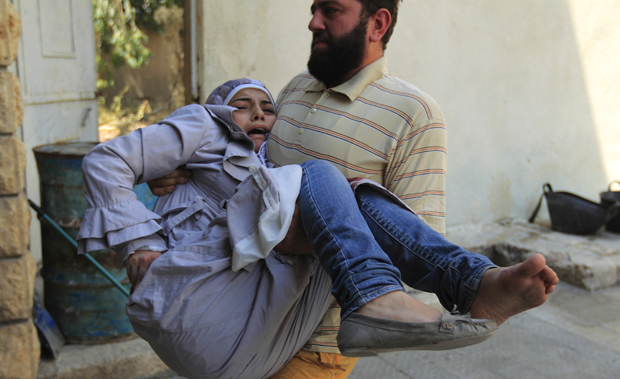 Humanitarian conditions have grown even more dire in the besieged Syria city of Aleppo with activists reporting dwindling stocks of food and cooking gas and only intermittent electricity supplies as droves of residents flee 11 days of intense clashes between rebels and regime forces.
Government helicopters on Tuesday pounded rebel neighbourhoods across Syria's largest city and main commercial hub. Activists said the random shelling has forced many civilians to flee to other neighbourhoods or even escape the city altogether. The United Nations said late Sunday that about 200,000 had fled the city of about three million.
"The humanitarian situation here is very bad," Mohammed Saeed, an activist living in the city, told The Associated Press by Skype. "There is not enough food and people are trying to leave. We really need support from the outside. There is random shelling against civilians," he added. "The city has pretty much run out of cooking gas, so people are cooking on open flames or with electricity, which cuts out a lot."
He said shells were falling on the southwestern neighbourhoods of Salaheddine and Seif al-Dawla, rebel strongholds since the rebel Free Syrian Army began its assault on Aleppo 11 days ago.
The UN has expressed concern over the use of heavy weapons, especially in Aleppo, while Syria's neighbours in the Arab League have issued even stronger denunciations.
"The massacres that are happening in Aleppo and other places in Syria amount to war crimes that are punishable under international law," Arab League Secretary General Nabil Elaraby said following a meeting in Cairo at the League's headquarters.
The official Syrian news agency said government forces were pursuing the "remnants of armed terrorist groups" in Salaheddine and inflicting heavy losses. President Bashar al-Assad's authoritarian regime regularly refers to opposition fighters as terrorists.
But the rebels denied that the government has succeeded in penetrating the neighbourhood with its tanks.
Tanks captured by rebels
Rebels have captured a number of government tanks in operations against army positions outside the city, including the town of al-Bab and the village of Anand. Saeed said they planned to use them in future operations.
The taking of Anand has also opened the road to the Turkish border, where the rebels get many of their supplies and manpower. It also the main escape route for refugees streaming out of Aleppo.
Many of those who have fled may be taking refuge with relatives in the countryside, remaining inside Syria.
According Turkish prime minister's office, there are some 44,000 Syrian refugees being sheltered in tent cities and temporary housing in camps along the border. While Turkish authorities say they have yet to see a massive upsurge in refugees from Aleppo, they are prepared to house up to 100,000.
Jordan, for its part, has also begun building a tent camp to house refugees along the border — something it was initially reluctant to do for fear of embarrassing Syria by calling attention to its refugee problem. But with 142,000 Syrians having already fled across the border, according to the Jordanian government, they needed to create the facilities to house them all. Jordan said this week that up to 2,000 new refugees are arriving daily.
While there had initially been speculation that Assad's regime might be in serious danger from the rebels, especially after a bomb killed four top security officials in Damascus on July 18, the core of the army has remained intact and the fight looks set to be prolonged.
A high-ranking Western diplomat familiar with the intelligence assessments on Syria said most expected the civil war to be a drawn-out affair.
There is also a great deal of concern in the West over the flow of foreign militants into Syria to fight a jihad, or holy war, against Assad's regime, said the diplomat, who spoke on condition of anonymity because he was not authorized to discuss such matters.
Militants from Chechnya, Yemen, Libya, Iraq, Afghanistan and Pakistan have been joining the rebels in significant numbers entering by way of Iraq and Lebanon and bringing along skills gleaned from battling the Americans and Russians, the diplomat added.
Syria has long branded the opposition as being foreign-funded "terrorist mercenaries" even when the anti-government movement was overwhelmingly peaceful and Syrian. Now, however, it appears that elements involved in militant jihads are increasingly joining the fight.
In the past month, the rebels have demonstrated greater capabilities and have mounted the biggest challenges to the regime so far in the 17-month-old uprising. They have been fielding more effective forces with better weaponry.
Saudi Arabia and Qatar have both expressed a willingness to fund the rebellion and are believed to be sending money to rebels to purchase weapons. On Tuesday, the official Saudi Press Agency said a weeklong national campaign to support "our brothers in Syria" had collected $117 million in cash donations to outfit relief convoys for Syrian refugees.