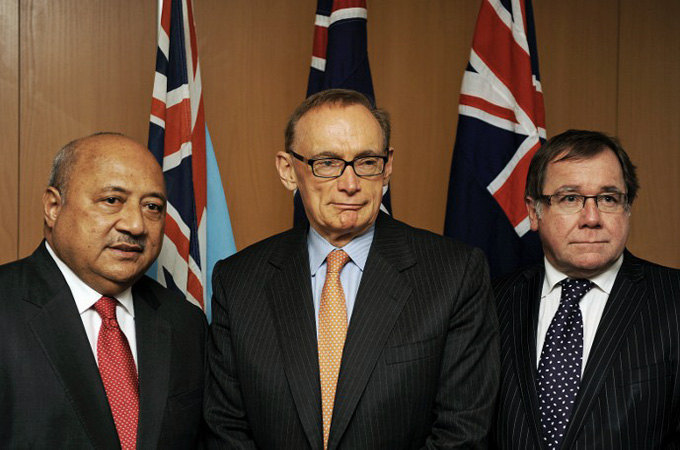 Australia and New Zealand agreed to restore full diplomatic relations with military-run Fiji on Monday, which had been suspended since tit-for-tat expulsions of each other's top envoys in 2009.
"As a consequence of today's meeting, all three sides agreed to restore diplomatic relations," Australian Foreign Minister Bob Carr told the AFP news agency.
The restoration of ties followed Carr holding talks with his New Zealand and Fiji counterparts, Murray McCully and Ratu Inoke Kubuabola, in Sydney.
"It was considered that the move to democratic reform was encouraging and irreversible," Carr added.
Relations deteriorated when Canberra and Wellington had led condemnation of Fiji military leader Vorege Bainimarama who had seized power from the elected government in December 2006 in the country's fourth coup in two decades.
The government of Fiji ordered their high commissioners out, claiming interference in its judicial affairs. The next day Australia and New Zealand expelled Fiji's envoys in November 2009.
Bainimarama took control pledging to root out corruption and introduce a one-person, one-vote system intended to end entrenched racial inequalities in the nation of 840,000, but reneged on a promise to hold elections in 2009.
Instead, he tore up the constitution and introduced emergency laws that muzzled the media and banned public meetings, saying the country would not be ready for elections until 2014.
Australia and New Zealand, major aid donors in the South Pacific nation, responded by successfully pushing for Fiji's suspension from the Commonwealth and the Pacific Islands Forum.
But since January, the military government has gradually relaxed some its emergency powers and announced plans to finalise a progressive constitution ahead of elections in 2014, leading to a thaw in relations.