More than $200m was wasted on a programme to train Iraqi police that the government in Baghdad neither needed or wanted, US auditors have found.
The Police Development Programme, which was to be the single largest programme launched by the US State Department anywhere in the world, was envisioned to be a five-year, multi-billion dollar effort to train local security forces after the US military pulled out last December.
Iraqi political leaders, who were anxious to keep their distance from US initiatives, were also unenthusiastic about the programme, the audit showed.
A report by the Special Inspector General for Iraq Reconstruction, to be released on Monday, found that the US embassy in Baghdad never received a written commitment from Iraq to participate in the programme.
Now, facing what the report called Baghdad's "disinterest" in the project, the embassy is massively cutting what was planned to be the centrepiece of ongoing US training projects in Iraq.
According to the report, the embassy now plans to turn the $108m Baghdad Police College Annex to Iraqis by the end of 2012, and will also stop training at a $98m site in the southern city of Basra.
The number of advisers, meanwhile, has been cut by nearly 90 per cent: from 350 to 36. 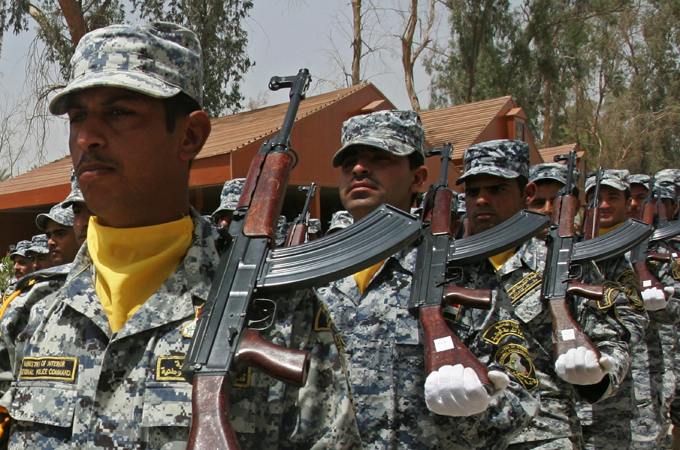 'Costly' decision
"A major lesson learned from Iraq is that host country buy-in to proposed programmes is essential to the long-term success of relief and reconstruction activities. The PDP experience powerfully underscores that point," auditors wrote in a 41-page summary of their inspection, an advance copy of which was provided to The Associated Press.

Auditors said that it had "clearly been difficult" for US diplomats to secure a solid commitment from the Iraqi government to participate in the programme.
Nevertheless, the report concluded, "the decision to embark on a major programme absent Iraqi buy-in has been costly" and resulted in "a de-facto waste".
The findings have called into question funding needs at the US embassy in Baghdad, the largest such mission in the world.
US President Barack Obama's administration is preparing its spending plan for the 2013 fiscal year, which begins October 1.
Auditors said that while it is currently unknown how much money is being requested for the Baghdad embassy, additional money for the police programme "may not be needed".
Despite years of training costing several billion dollars, Iraq's police force remains vulnerable to attacks from fighters targeting the government.
On Sunday, seven police personnel were killed and nine wounded in bombings and shootings near the former al-Qaeda stronghold of Fallujah, about 64km west of Baghdad.
The attack appeared to be the latest strike in a campaign to reclaim areas that fighters had been ousted from by the US military.
Findings disputed
In a July 26 letter responding to a draft of the report, Carol Z. Perez, an acting US assistant secretary of state, said that the embassy would be requesting additional funding for the police training programme in 2013.
She disputed the finding that funds had been wasted, saying that Iraqis will continue to use the Baghdad Police College facility for training, even if the US was not involved in said initiatives.
Moreover, Perez said, the embassy had been assured by Adnan al-Asadi, the Iraqi principal deputy interior minister, that his country is committed to a streamlined version of the training programme.
US diplomats will continue to work with top security officials, she said, "to ensure that our police assistance efforts meet mutual goals and objectives to sustain senior-level Iraqi commitment to the programme".
The auditors, however, said that those assurances fall short of a written commitment. They quoted al-Asadi as telling US inspectors that the police training programme was "useless".
Al-Asadi could not immediately be reached for comment, and his spokesman declined to discuss the report.
"The Iraqi federal police went through many training courses, in many fields, and that resulted in having many experts and specialist academies," Hakim al-Zamili, a key member of the Iraqi parliament's security oversight committee, said
"At this point, we don't need the American expertise, because of the expertise we have now."
Auditors said the US has spent about $8bn to train and equip Iraqi police since the 2003 US-led invasion.
At that time, there were about 58,000 police in Iraq. The report said that number had grown to 412,000 by 2010. Other estimates put the size of Iraq's federal, local and border police force at 650,000.
The training was led by the US military until last October, six weeks before the last US troops left Iraq.
The embassy then took over the programme, but with what Monday's report described as "mixed results".
Around half of the remaining 36 US advisers are to be based in the city of Irbil, capital of the northern Kurdish region, where the programme was embraced by local authorities.