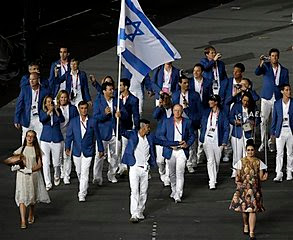 NBC's Bob Costas noted a controversy over honoring Israeli athletes killed at the Olympics 40 years ago during his coverage of the opening ceremony but stopped short of offering his own protest.
The International Olympic Committee had declined a request to hold a moment of silence during the ceremony to acknowledge the 11 Israeli athletes and coaches killed by Palestinian gunmen in Munich in 1972. Costas called that decision insensitive during an interview this month and indicated he would call for his own moment of silence when Israeli athletes marched into the Olympic Stadium on Friday.
Costas' comments took his bosses by surprise. Jim Bell, executive producer of the NBC's telecast, said this week that Costas hadn't brought it up with him before the interview.
As the athletes marched in Friday, Costas said that IOC President Jacques Rogge led a moment of silence for the late Israelis this week before about 100 people at the Athlete's Village.
"Still, for many, tonight with the world watching is the true time and place to remember those who were lost and how and why they died," Costas said.
After a five-second pause, NBC cut to a commercial.
Abraham Foxman, national director of the Anti-Defamation League, which promotes Jewish causes, said he appreciated Costas bringing up the issue, though he didn't expect a moment of silence.
"He established a sense of history and decency and sensitivity, I would say, in the tradition of Jim McKay," Foxman said. The late McKay is the former ABC sportscaster who anchored coverage of the 1972 attack.