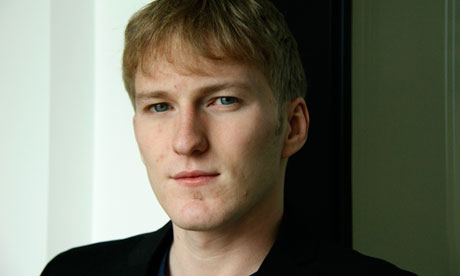 Julian Assange has lost another of his dwindling band of loyal supporters. David House, one of very few people to have met both Assange and the WikiLeaks suspect Bradley Manning, has denounced the WikiLeaks founder in a blaze of excoriating tweets.
House, a computer scientist based at MIT in Cambridge, Massachusetts, launched his attack on Assange out of the blue on Tuesday morning from his twitter account @VoxVictoria:
David House@VoxVictoria
As long as #WikiLeaks remains icon of the Open Government movement, the antics of Assange will continue to reflect negatively on us all.
31 Jul 12 ReplyRetweetFavorite
The Twitter attack from House continued with a comment that as long as WikiLeaks is controlled by Assange, the shortcomings of his leadership would "continue to put WikiLeaks' supporters at risk". The implicit reference to Manning – the US soldier facing 22 charges as the alleged source of the massive WikiLeaks publication of state secrets – was made explicit in House's next tweet:
David House@VoxVictoria
The alleged actions of Bradley Manning have not been edified by the missteps of #WikiLeaks under the direction of Julian Assange.
31 Jul 12 ReplyRetweetFavorite
House's criticisms come two days after WikiLeaks claimed credit for a hoax article under the name former New York Times editor Bill Keller which was circulated widely on the internet. The organisation's involvement in the hoax drew criticism that it had undermined its credibility for a publicity stunt.
House's decision to publicly call for Assange's removal is significant because until now he has been assumed to be a firm supporter of the Wikileaks founder. He took a defiant stance after he was called before a grand jury in Virginia investigating the possibility of bringing criminal charges against Assange for the WikiLeaks publication of the Iraq and Afghanistan war logs and hundreds of thousands of confidential US diplomatic cables.
Not only did House refuse to answer any questions in front of the grand jury, pleading the Fifth Amendment, he recently took the legally risky step of publishing his notes of the proceedings – a rare breach of grand jury secrecy.
House used to be one of the few people allowed to visit Bradley Manning in more than two years in military custody. House is still regularly referred to as a "close friend of Manning". However, Manning cut him off from his small list of approved visitors several months ago, for unknown reasons, and the description is no longer appropriate.
It is true, though, that House has the distinction of being in a very select – perhaps even unique – class of having met both Manning and Assange. Apart from his visits to Manning, he also met Assange in London on a few occasions. These meetings took place after Manning was arrested in May 2010.
Assange remains in sanctuary in the Ecuadorean embassy in London seeking to avoid extradition on sexual misconduct allegations to Sweden. His inner circle of supporters and WikiLeaks staff has already withered to about five or six people.
House describes himself as an "open-government advocate and information economics researcher with the MIT Center for Digital Business".
In his tweets on Tuesday House encouraged his followers to donate to the Bradley Manning defense fund and accused Assange of deviating from the core values he held for what he called "open government whistleblowers and activists":
David House@VoxVictoria
Assange deviated from these core values. Either he must be replaced at #WikiLeaks, or WikiLeaks must be displaced within OpenGov movement.
31 Jul 12 ReplyRetweetFavorite
House declined to comment to the Guardian.
His Twitter onslaught provoked a robust response from several people who still see Assange as a free information hero. Typical was the tweet from Elizabeth Ferrari: "Attacking Assange is counter-productive to the defense of all whistleblowers being persecuted by the American gov."