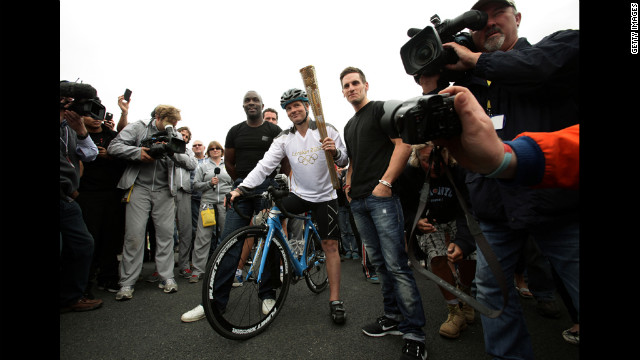 The Olympic torch is set to make a dramatic entry to London Friday, descending via a 180-foot line from a helicopter to the historic Tower of London.
The torch's arrival in the capital begins the final week before the Games open and the final stage in its long journey.
More than 10 million people have already lined the streets of more than 1,000 communities around Britain to see the torch, which has been carried by more than 7,000 torchbearers, Olympic organizers said.
Nearly 1,000 more will carry the torch along nearly 200 miles of London streets over the coming week, before it takes a starring role at the opening ceremony at the Olympic Park on July 27.
Read about Greece passing the Olympic flame to Britain
Eighteen torchbearers will carry the flame on the final day of the relay, with seven of them traveling with it down the River Thames on the royal barge Gloriana, which played a central role in the Diamond Jubilee river pageant for Queen Elizabeth II.
The torch's arrival at the Tower of London on Friday evening promises to be eye-catching.
A Royal Marine commando, carrying the flame in a lantern, will abseil -- the technique known as "rappel" in the United States -- 180 feet from a Royal Navy Sea King helicopter into the grounds, where London Mayor Boris Johnson will be waiting to greet it.
The torch will be carried around the Tower, which dates back to the 11th century, before spending the night in the safekeeping of the Jewel House, home of the Crown Jewels.
The buildup to the Olympics has been overshadowed by a security fiasco caused by the failure of contractor G4S to supply enough guards for the Games.
2012 Olympic flame lit in ancient stadium
But Johnson told CNN's Becky Anderson that while London authorities are not complacent, he is confident in their ability to keep visitors safe.
"We do everything in our power to maximize security at the venues and that's working well now -- the army, the military as well as G4S are providing very safe conditions on the site, plus there is a huge amount of work that nobody has seen involving the intelligence service," the mayor said
"That's something about an event like this -- you listen out for what may or may not be happening on the Internet, you try as hard as you possibly can to monitor the potential suspects."
Johnson said it is impossible to guard against all "unknown unknowns" and that's why strong security is needed at venues.
"At no stage can you guarantee that someone won't do something moronic, stupid, violent and tragic, not just in London but the whole of the UK is a potential target in this period," he said.

But at the same time, he said, "the intelligence is as reassuring as it could be under the circumstances. The threat level as far as we are aware has slightly come down in the last 12 months, but you can never be certain."
Look at photos of the journey of the Olympic flame
Authorities said Thursday that an additional 1,200 British troops were being placed on standby for the Olympic Games.
The company's recruitment shortfall had already forced the government to call in 3,500 extra military personnel to help.
Culture Secretary Jeremy Hunt, the minister in charge of overseeing the Games, said that there was no need to deploy extra troops but that putting 1,200 on standby means they can be moved within 48 hours rather than seven days if required.
G4S has a £284 million ($444 million) government contract to provide 10,400 security staff for the Olympic Games, but only about 4,000 guards are trained and ready.
It expects to provide at least 7,000 by the time the Games start, chief executive Nick Buckles told lawmakers earlier this week.
Home Secretary Theresa May gave more details on how the fiasco unfolded in a letter sent to the head of Parliament's Home Affairs Committee on Thursday.
Although the Home Office did not become aware of the full extent of the shortfall until July 11, G4S had alerted the government to "scheduling problems" affecting staff numbers on June 28, she said.
Once it became clear how large the shortfall would be, the government put its contingency plans into operation, she wrote.
"G4S will still be making a substantial contribution to venue security," she wrote.
"All G4S personnel working on venue security duties will have had training for the role they are undertaking," May added.
The G4S recruits are supposed to perform tasks including venue perimeter security, such as manning X-ray machines, searching people, searching vehicles and operating closed-circuit television systems, the company said.