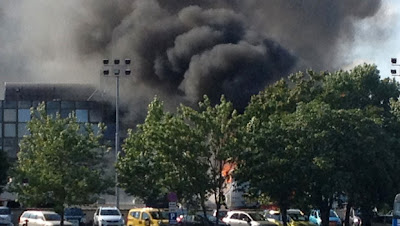 SOFIA, Bulgaria - A bus carrying Israeli youth exploded Wednesday in a Bulgarian resort, killing at least four people and wounded more than two dozen, police and hospital officials said. Israeli Prime Minister Benjamin Netanyahu called it "an Iranian terror attack" and promised a tough response.
The explosion took place in the Black Sea city of Burgas, some 400 kilometers (250 miles) east of the capital, Sofia. TV images showed smoke billowing from the scene — a parking lot at the local airport, where the Israeli tourists had apparently just landed. Several buses and cars were on fire near the shell of the exploded vehicle.
Bulgaria, an eastern European nation bordering Greece and Turkey, is a popular tourist destination for Israelis.
It was not yet certain what caused the blast — whether it was the result of a suicide bomber or a device remotely detonated — and no group immediately claimed responsibility.
But Israelis often have been targeted in attacks outside their country, and Wednesday's bombing coincided with the 18th anniversary of the bombing of a Jewish community center in Argentina that killed 85 people.
Israel suspects Iran of being behind several of those assaults, which have added to the tensions between the two nations already exacerbated by Israeli warnings against Iran's alleged pursuit of a nuclear weapons program.
The Israeli premier noted that Wednesday's attack followed similar attacks or attempted attacks in India, Georgia, Thailand and Kenya and Cyprus in recent months. He said that once again, "all signs point to Iran," though he did not offer any evidence to back up the claim.