Twin car bombings in the Iraqi capital Baghdad have claimed 13 lives, and left at least 47 people injured, officials have said.
The first explosion on Tuesday occured when a suicide car bomb exploded at the emergency police's headquarters.
Minutes later, the second car blew up outside an Iraqi passport office located a few kilometres away, the Associated Press news agency reported.
"We were in a patrol when we heard the first explosion. The second explosion hit another square, and we went to help ... There was a minibus with six dead passengers inside it," said Ahmed Hassan, a police officer.
The explosions followed attacks and bombings in Baghdad and across the country on July 23 that killed more than 100 people in a co-ordinated surge of violence against mostly Shia Muslim targets. 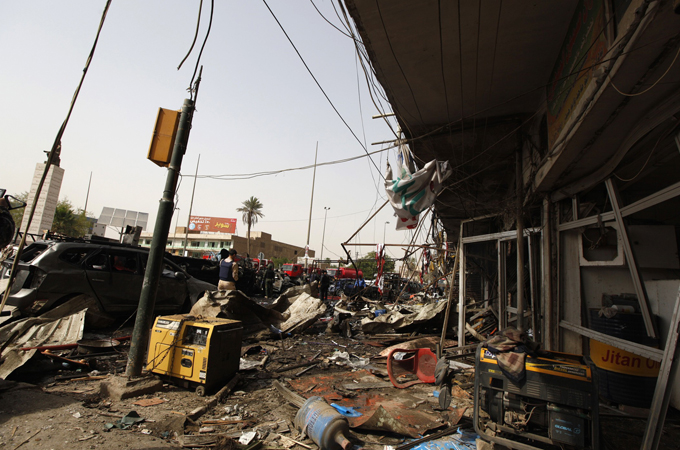 Al-Qaeda's local affiliate, the Islamic State of Iraq, claimed responsibility for those attacks.
On Monday, gunmen shot dead a television presenter and wounded his mother, wife and four-month-old baby boy, according to the Journalistic Freedoms Observatory media rights group and a police officer.
Iraq regularly ranks near the bottom of global press freedom rankings. It was at 152nd place out of 179 countries in media rights watchdog Reporters Without Borders' 2011-2012 World Press Freedom Index, down 22 from the year before.
Violence has eased since the height of the war six years ago when tens of thousands were killed in sectarian slaughter between Sunni and Shia Muslims. But Since the last US troops left Iraq in December, fighters have carried out a major attack at least once a month.