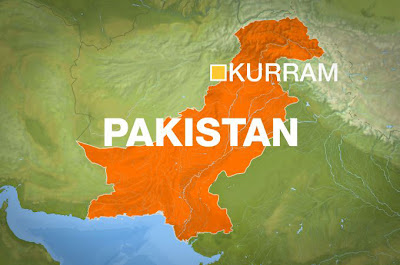 At least nine people were killed and 16 others wounded when a suicide bomber blew his explosive-laden car in northwest Pakistan's tribal region, officials said.
The bomber detonated the vehicle just outside the compound of anti-Taliban commander Maulana Nabi, in the town of Spin Tal which lies in the Kurram tribal area, senior administration official Zakir Hussain said on Saturday.
"It was a suicide attack, the target was militant commander Nabi's centre," Hussain told AFP.
Residents said he survived the attack.
Nabi's guards stopped the vehicle and the attacker blew up his car after he failed to enter the compound, he said.
Officials said Nabi had developed differences with the leadership of the Pakistani Taliban.
No one has claimed responsibility for the attack.
In another incident, a roadside bomb exploded near a passenger bus in the northwest, killing three people, said police officer Zahir Shah. The attack in Upper Dir in Khyber Pakhtunkhwa province also wounded seven people, Shah added.
In southwest Pakistan, unknown assailants armed with assault rifles and rockets attacked a coast guard camp in the port city of Gwadar, killing six members of the force and wounding two others, said local intelligence officials, speaking on condition of anonymity.
A coast guard official in Gwadar, a port town southwestern province of Baluchistan, confirmed the attack and said members of the force were killed and wounded, but could not provide specific figures.