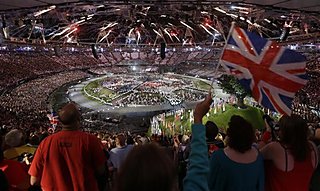 A look at media coverage of the Summer Olympics:
Even before NBC signed on for its coverage of the Summer Olympics in London on Friday, it drew a storm online for its decision not to stream the opening ceremony digitally. Despite the grumbling, it's a decision that may pay off for the network.
NBC Universal has promised to stream live online every athletic competition in the Summer Games for the first time. But the opening and closing ceremonies were always planned to be shown on tape delay, a network spokesman said. Coverage began shortly before 8 p.m. on the East Coast, about the same time that spectators in London — which is five hours ahead of New York time — were filing out of Olympic Stadium.
NBC Sports spokesman Christopher McCloskey said the ceremonies "are complex entertainment spectacles that do not translate well online because they require context, which our award-winning production team will provide for the large prime-time audiences that gather together to watch them."
Many people took to Twitter to complain Friday that they felt cheated by the decision, and provided online links to other outlets, like the BBC, that were streaming the ceremony online.
The website for Business Insider said "boo" about NBC's decision and offered two links. The popular sports website Deadspin posted a link to the BBC stream and urged its followers to watch it as a way of sending NBC an obscene gesture.
CNN's Piers Morgan, who was tweeting details about the ceremony in the late afternoon, tweeted shortly before 7:30 p.m. ET: "Laughable that America is yet to start watching the Olympic ceremony on TV. Seriously."
But NBC executives will gladly trade the complaints for a repeat of what happened four years ago in Beijing.
The network similarly offered the opening ceremony then on tape delay and there were many complaints, although less widespread because of a less wired world. But all the talk about the ceremony in the hours before it was televised created a buzz, and the 34.9 million people who watched it was the largest opening ceremony audience in 12 years. NBC makes most of its money through its prime-time advertising, and the strong opening night ratings set a tone that continued throughout the Games.
NO RUSH: Did some of the Olympic trivia uncovered by NBC researchers hit the cutting room floor on Friday? NBC prime time hosts Bob Costas and Matt Lauer noted more than once that athletes were entering the stadium for the opening parade at a faster clip than normal.
UPCOMING: We'll know quickly whether swimmer Michael Phelps will make these games his personal gold mine, like he did in Beijing. Phelps' faceoff with fellow American Ryan Lochte in the 400 meter individual medley highlights Saturday's full opening day of competition.